The latest base completed for Jim's Soviet army is this anti-tank gun and crew. There'll be several more bases coming soon, with more artillery, forward observation post, command and more machine guns and infantry to come. 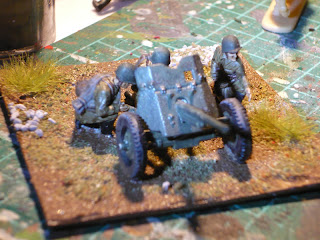 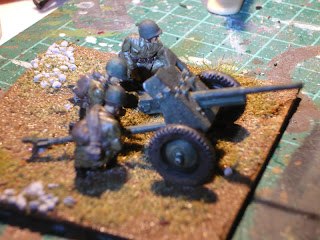 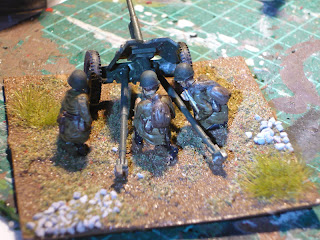 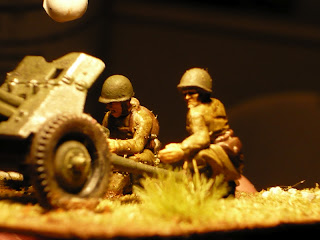 Email ThisBlogThis!Share to TwitterShare to FacebookShare to Pinterest
Labels: Soviets

When it rains, it pours!

Yesterday my Romans and Goths arrived and today my animals from Irregular Miniatures. Ordered in March and only just arrived, though I did have it sent by surface mail to reduce the cost.

I'll use these in scenarios where one side has to protect a supply column, or use scouting to find where the locals drive their herds over fords, for example. 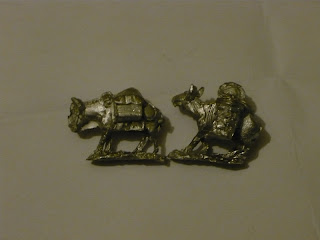 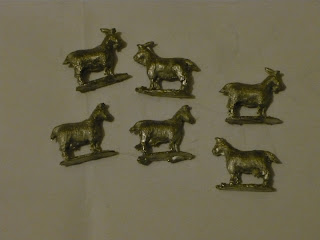 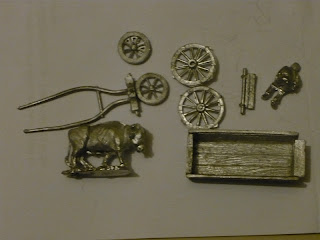 I've just published my first post on my new blog Romani in Tenebri. Go and take a look!

It's a work in progress dedicated to my Late Roman project. I thought that since this one is supposed to be mainly Napoleonic, I should not contaminate it too much with plans for other periods.

I always thought I'd be a one period kind of gamer, but as you may be aware, I've felt the siren call of late antiquity. In order to do justice to this blog, I thought it only fair to start a new one. Whether or not it goes anywhere, time will tell.
Posted by Ben Gilmour at 10:55 PM 8 comments:

Email ThisBlogThis!Share to TwitterShare to FacebookShare to Pinterest
Labels: Romans

Numbers 100 and 200 seem to have slipped me by, so I thought I should mark the occasion this time. I was going to just show some WIP of my Roman cavalry, but as this blog is supposed to be about my Napoleonic collection I thought I should do something relating to the topic.

It is high time to display my entire collection of Napoleonic 1/72 figures in all their glory and how better to do that than by having them face off against each other?! 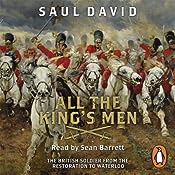 After listening to various podcasts (especially the American ones) I succumbed to the sponsor's  message and got my free download after subscribing to Audible.com.

I settled on 'All the King's Men' by Saul David, whose work on the Victorian era I'd read previously and thoroughly enjoyed. I don't know if it was the format, the narrator or the content, but I was left a little underwhelmed by the experience. It may be that if I'd read it myself I would have enjoyed it more, but I'm not convinced. Part of the problem is that the book bills itself as "The British soldier from the Restoration to Waterloo", but it is more a narrative of the so-called Long 18th Century, rather than a sociological examination of the redcoat during this period.

As a narrative history of the wars, campaigns, battles and personalities of the period there's nothing wrong with it and actually makes a fairly good tale, but the misleading subtitle left me feeling slightly cheated. That is more than likely not the author's fault, but detracted from what would have been an otherwise enjoyable experience.

As to the narrator, Sean Barrett (I'm sure I've heard him narrating a Sharpe novel in audio-book form), his stentorian delivery sounds more applicable to the stage rather than reading a non-fiction book. When he was reading first person recollections of events his acting skills and accents were suitable, but I found the rest of his delivery a bit artificial. Maybe  I've been spoiled by listening to too many podcasts where the presenters are enthusiastic amateurs who come across as friends chatting animatedly to you about their favourite topic. I found the experience less than what I'd hoped for. Maybe it's a format that lends itself more to fiction?


Anyway, the book itself covers the history of the British army from the time of the Restoration all the way through to the fall of Napoleon. During this time the army was led with varying degrees of success by leaders including the best two generals Britain and possibly the world has ever known; Marlborough and Wellington. Besides the unfortunate events of the American Revolution, the British army didn't suffer any major defeat during this period. The author compares the tension between the maritime vs. continental strategies that dominated the period and (not surprisingly) concludes that the maritime supremacy that Britain gained during this period resulting in the great 19th century empire was the result of all the hard-won victories gained by the army, not the other way around. Because Britain fought mainly the French, they could attack them in their colonies, but also as part of a continental coalition, thus being able to exact better terms once the post-war spoils were divided compared to what they would have gained if they had concentrated solely on colonial and naval warfare.


In all, it's a fairly standard narrative military history of the period, understandably focussed on the big events and the stand-out personalities of the period.


I might try and find a hard-copy version of it at some stage in the future and re-read it to see if I enjoy it any more than I did listening to it.
Posted by Ben Gilmour at 3:26 PM 4 comments:

Spanish Cavalry Save the Day (....nearly!)

Another game, another loss! I really should stop playing with my Spanish army(or play a bit smarter by bunching a brigade of  them in columns and only using them as a reserve.)

Anyway, my newly minted Dragones del Sagunto survived the games as one of the few units left standing, so that was a victory of some sort, I guess......What? Stop rolling your eyes, you lot! I've got to get it where I find it!

In a 1200 pointt game against Garry's French I set up my British on the left flank and the Spanish on the right. I had the Walloon Guards and the converged grenadiers on the right flank as that's where I expected the worst to come. The theory was right, but the practice left a little to be desired as the Walloons acted like recruits and failed to form square as the Vistula Lancers came bearing down on them.

I desperately tried to hold on after the Walloons got squished by sending the British guns and 2 infantry battalions to bolster the Spanish, but  my luck wasn't with me as it was last game and Garry's tactical nous didn't let me get away with wishful thinking.