The French are Van(a)-quished, or King Joachim Bites the Dust!

Finally got back to the club for another game, although there was a considerable lowering of the mood when it became know that the fridge behind the bar was broken.

After that shock was processed, we got down to the business at hand; a game between the Forces of Reaction (Paul and Vana) vs. the Forces of Liberté (Bill and me).  We decided to randomise our entry points, but rather than gradually feeding our forces onto the table, we chose to just dump them all on at once! That proved to be a little awkward as Vana and Bill appeared on the same side of the board at 90° to each other and were into it from the word go. Paul and I spent most of the game getting into position and then waiting for the other two to finish their turns before being able to do anything else.

While Paul and I faced each other across the table in a more traditional formation, Bill was heading for Vana's flank. Vana split his Austrian force into two, with the majority facing Bill's French, while a brigade and a bit maintained a link with Paul


As Paul had established a strong defensive line anchored on a village and backed up by a 12-lber battery on a hill to the rear, I decided my best chance was to attack Vana's linking brigade. It consisted only of infantry, so was a perfect candidate for a triple threat combined arms attack of cavalry, artillery and infantry; cavalry to scare the infantry into square, artillery to whittle away and weaken the square, and infantry to apply the coup de grâce once the square was too feeble to resist. That was the plan, anyway! With my 3 battalions of Neapolitan guard infantry, I reckoned it was a done deal; I just had to hope that the Neapolitan line infantry were up to the job of following through in the aftermath. It was taking a hell of a long time to bring them up in support, as troops rated Conscript and Landwehr (which Neapolitan line infantry are!) take double the functions to do simple maneuvers.


My right flank consisted of the Franco-Italian part of my forces which took up a defensive posture against a possible Russian cavalry attack. However, with my own defensive line, plus reserves, it wasn't likely that there'd be much action on that flank any time soon.


After my artillery battery made it to the top of the ridge, it unlimbered but was almost immediately under threat before it could come into play; Vana had brought up another infantry battalion in square up onto the flank of the battery. Now I had to divert one of the Guard battalions to deal with it, diverting it from the planned attack on the anchored line. Ordinarily, a battalion in square attacked by another in column doesn't really stand much of a chance, but Vana likes to pay for quality over quantity and I found out that this unit was no exception to the rule! Even though his troops were rated Elite, my Veteran rated column should have been able to at least dislodge the square from the ridge, providing my artillery with the opportunity to relocate unmolested. Of course, that would be if my dice hadn't completely betrayed me and his came up trumps. In the first of several tin-arsed rolls, Vana rolled the magic 6 on a d6, while I rolled a one. Coupled with a successful defensive fire roll, my attack on his square was repulsed!  Senza precedenti!

Because that attack failed, I couldn't then launch the attack on the nearest part of the anchored line with the remaining two Guard battalions, as the defeated battalion would add negatives to any pre-melee rolls.

Meanwhile, during all the to-ing and fro-ing to get my attack in place, Paul had placed his cavalry in a position to threaten my intended path of attack. Their flank was exposed to the woods however, so I sent one of my plodding Neapolitan line battalions through the woods to place themselves on the cavalry's flank. Up to now cavalry have had no opportunity to react to a threat like this; they have just had to stand and take the inevitable flank shot. Now, we tested a new rule which acts in the same way as rolling for an opportunity charge; the cavalry roll 2d10 and if the result is equal or greater than the number of inches from when the threat is detected, then the cavalry can elect to make a defensive maneuver, i.e. back away, turn to face etc. It seems much more logical and less weighted in the infantry's favour. So, Paul rolled and his cavalry managed to evade the threat, backing up out of musketry range. However, I left the infantry on the edge of the woods to discourage any attempts at disrupting my eventual attack.

Eventually I managed to force back the pesky square which then enabled me to attack the anchored line. With the artillery still focussed on the nearest column anchoring the line, I managed to bring up my remaining Velite battalion into its flank. I was going to fire into the flank and force the morale test. If the enemy failed and fell back, all well and good, but I also had the Guard Voltiguers lined up to charge if it they didn't. In the end the flank fire was enough, so I charged the Voltiguers at the noe un-anchored line. With enemy in their flank and a friendly unit falling back, I thought it was a safe bet that my charge would be successful. In yet another display of the Dice God favouring Vana while abandoning me, Vana not only inflicted damage on my charging unit, but stopped them in their tracks, while standing firm and refusing to budge! I unleashed my Italian dragoons on the line instead, pretty sure that an unanchored line would fold at the sight of a column of heavy cavalry bearing down on them. Of course, they did the unlikely by hitting charging cavalry and destroying 50% of the front line, which, coupled with an appalling pre-melee die roll, meant not only did the attack fail, but the dragoons were sent reeling in disarray! All the while the Austrian line just stood there nonchalantly blowing the smoke from their musket barrels!


Paul then tried a similar trick with me, sending his dragoons at my Voltiguers, but I emulated Vana and sent his hussars packing! Swings and roundabouts...


His dragoons had gone on a big detour around my flank, but I held my lancers in place to keep the pesky square from getting any ideas. Still, I probably could have at least altered their angle, because eventually I had dragoons charging the lancers' flank. I tried to evade, but to no avail (being Neapolitan cavalry, what did I expect?) and had the lancers unceremoniously swept from the field.

By that time it was all over bar the shouting, though; My Velites swept down the flank of the unanchored line, clearing the ridge of Austrian infantry. Better late than never...


Meanwhile, Vana encouraged me to go for the big 5:30 death-or-glory charge against Paul's line on the right. paul had moved his big guns into the front line and seemed to be preparing an advance. I still had an untouched reserve, which, when added to the battalions in the front line, gave me a fighting chance of breaking through, even with fire from 12-lbers and infantry to greet them on their approach. With Murat attached to give leadership bonus, what could go wrong? Well, Paul rolling 0 on a d10 for defensive fire, that's what! Murat was killed and the attack faltered! The resulting morale check saw the attackers break and run; Game Over, Man! 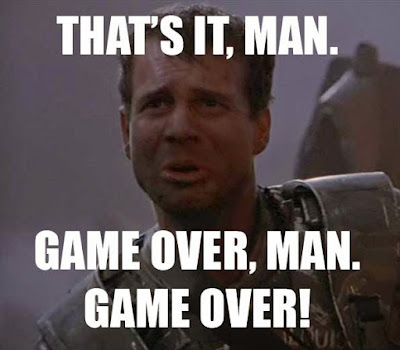 Thanks for all your kind words from the last blog-post. Our family really appreciates it; she was a bad-tempered mog, but she is missed by all, including the dog.

Beloved family member Mintie was struck by a car outside our house and was euthanized shortly after.

She will be greatly missed.

Below are some action shots of her favourite activity (besides eating), sleeping. She wasn't fussy; on laps or in the sun. 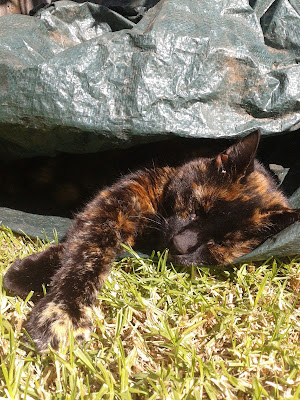 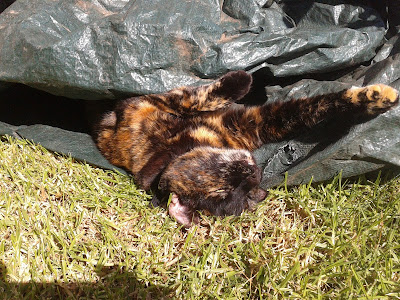 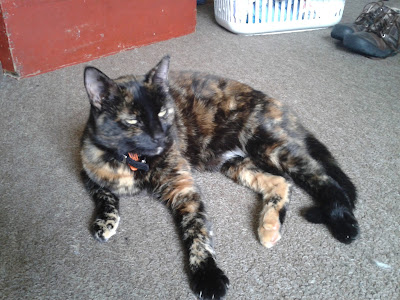 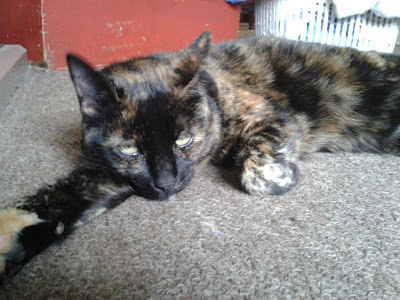 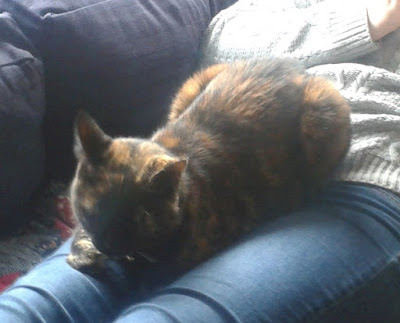 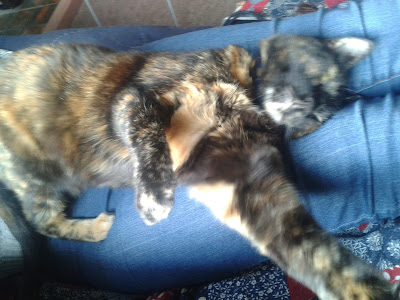 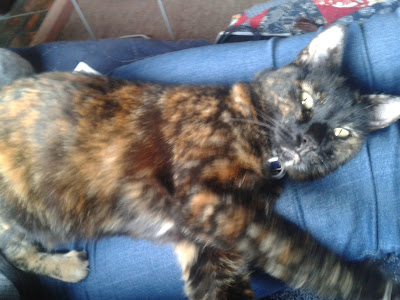 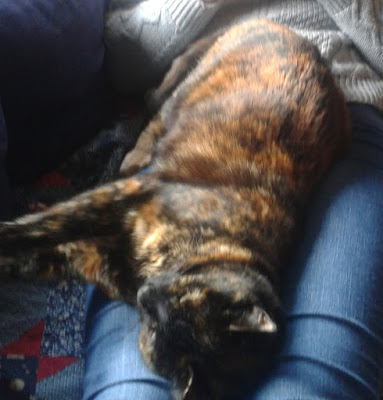 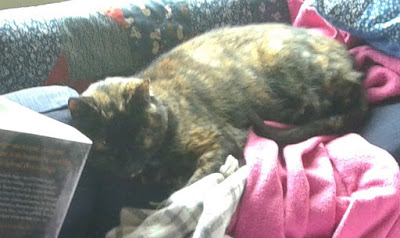