Here is (finally) the last installment of our mega-Borodino game!

When we last left off, the game was still in the balance with the main action in the south, while the centre consolidated and I tried to gain bridgehead over the Borodino bridge, after it was clear that I would be facing no threat on the northern flank. After 3 fruitless attempts, James and I had to admit defeat and try another tack.

So the Russians were secure in the north, preparing for the French attack in the centre and ferociously disputing the south against Poniatowski and Davout.

We pick up the game from this point. 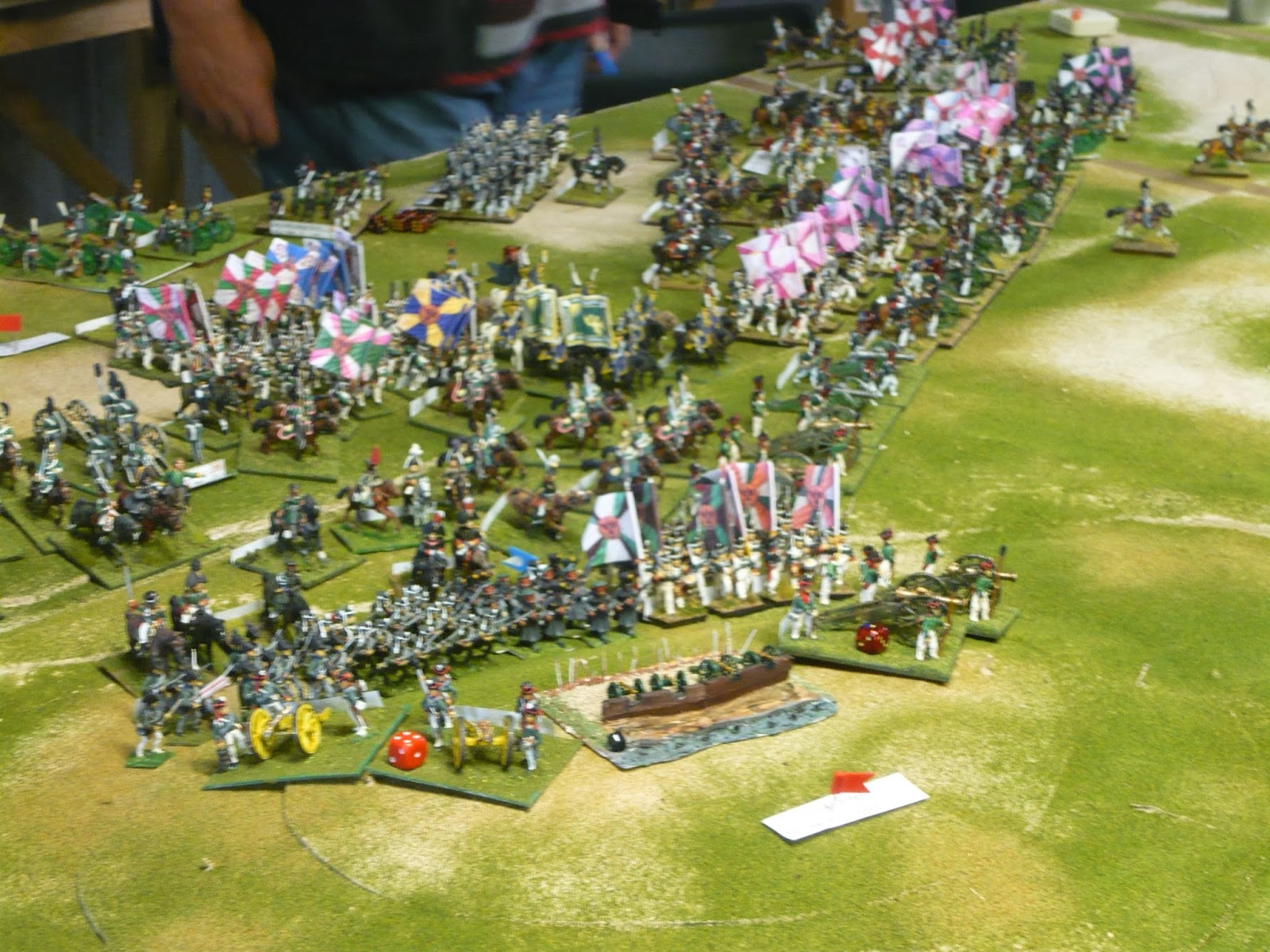 With that, it was obvious that neither side could land a knock out blow. The French had committed the Guard, so there were no more reserves. The Russians still had some reserves left, but not enough to make a difference.

Despite Quinny taunting us that our victory at the bridge was fleeting, and that he would be able to send us back across the bridge if there was another turn, he readily admitted that in his role as Kutuzov he'd probably have to issue a breakoff order just like in the historical battle, as there was no way that a decisive breakthrough was going to happen. Keeping a force in being was more important than winning an attritional battle, but losing the war.

So ended a brilliant 4 days' gaming. Thanks again to Tim and Jill for being wonderful hosts and building the brilliant terrain. Thanks also to the Andrews for umpiring and the design of the special rules. Also to John R. for the special terrain features like the Borodino church and the redoubts and fleches. A big thanks to all those who were there throughout the weekend, too. A better bunch of blokes couldn't be found to wargame with. Special mention to John W. and Fly, who lent us their troops, even though they couldn't make it; Very generous!.

Special thanks to James of the Avon Napoleonic Fellowship for making the long trip over to see how we do it in this neck of the woods. His passion for the period and his quick grasp of the rules stood him in good stead as did his sense of humour and general outgoing nature. It was like he'd been part of the group for years, rather than just days! One moment asking pertinent questions regarding the rules, the next moment taking the piss like an old hand! A better bloke you couldn't find (we regard him as an honorary Victorian and don't mention that he's a Sandgroper!). Great to finally meet you James, and I trust this won't be the last time we'll see you either on this side of the continent, or over your way!


Post Script Edit: I nearly forgot to thank Jim, whose idea this whole three ring circus was! He put his money where his mouth is and started researching the whole project about 18 months ago. If he didn't pick up the ball and run with it, this game may never have got off the ground. Kudos, Jim!

This post will concern itself with the rest of the second and the beginning of the third day's play, with the emphasis on my end of the table, as that's where my attention was most of the time.

However, I'll start this post with the action at the southern end and centre of the table. I wasn't able to keep track of the action, but the gist of it was that there was a real arm-wrestle at the other end of the table with Poniatowski's Poles (commanded by Darren B.) assisted by some of Davout's troops (Jenko) up against Pete E. and John R. in a real backwards and forward tussle.

In the cnter Andrew S. as Ney was consolidating his forces in the dead ground in front of the Russians' position, while the Cavalry Reserve commanded by Macolm, as Murat, assembled in between Ney and Davout's position. It looked unstoppable until you lifted your gaze at the Russian guns facing the French!

Back on the Northern front IV Corps was doing a lot of standing around waiting for an attack that didn't eventuate, so Boney (Robin) decided to relieve me of the Young Guard and the light cavalry of the Cavalry Reserve, and orderded me to capture the bridge.

Confronted by skirmishers over the other side of the bridge, I thought the best option for capturing the bridgehead would be to put some cavalry across the bridge first, followed by infantry. This time I led with quality, sending the Italian Queen's Dragoons across first, then followed up with my best troops, the 92e Ligne, all rated as Grenadiers! This should work!


The chances of taking a bridge in the face of the enemy are always long odds, but I truly thought that I had a chance with the Queen's Dragoons and the grenadier rated 92e. However, the dice god was against me when the dragoons lost their first morale test after taking 25% casualties. It wasn't a fait acompli by that stage, but after losing that morale test and retreating into the infantry, the odds got longer and longer.

I did provide Quinny with a lot of action resulting in a crushing victory to him, which always puts him in a good mood!

"Quinny! What is best in life?" "To crush your enemies -- See them driven before you, and to hear the lamentation of their women!"


STAY TUNED FOR THE FINAL INSTALLMENT!
Posted by Ben Gilmour at 11:18 PM 6 comments: