For once I'm being a little more methodical in my preparation for the Analogue Hobbies Painting Challenge; I'm actually preparing the figures I'm going to paint ahead of time! The last couple of years I've still had quite a lot of units still to paint in preparation for our big January game; too many for my small and messy workspace!

This time I'm just painting for myself without the looming deadline of the first weekend after the New Year spurring me to finish the last few brigades. I've given myself the target of 400 points to complete and below will be the first few units to be undercoated before the off in 10 days' time.

Curt was encouraging the issuing of challenges between entrants, so as one of two challenge participants painting in The One True Scale, I've challenged the other to a race to reach 200 points! Sander, I hope you've got your running shoes on! (Truly, without the pressure of a deadline, I reckon I'll not be painting at anything like the rate I was last year...)

I'd never really thought of our hobby as something that would lend itself to the medium of video, but I am proved wrong!

Last week I was pleasantly surprised to have an email from Gary Wright via the Kontactr widget on my blog. Gary has his own YouTube channel Marksman Gaming and produces fillums about his work on 1/72 figures, including, but not restricted to Napoleonic figures. Besides his own YouTube channel, he suggested I take a look at others as well like Blucher1815red (whose work I'm already familiar with through Benno's Forum).

With a definitely individual presentation style, Gary takes us through what's on his workbench and what he's finished and up coming plans. The great thing about his and Blucher1815red's channels are that they both give you a good insight into figure sets that you might be considering buying. You can see the figures from all angles as Gary and Blucher give their thoughts on the figures while giving you an all angles view of the figures, something that PSR can't give you.

I really admire Blucher's painting style and it's interesting to see how he does it.


Here's a couple more wargames oriented channels, too, with a focus on 28mm figures. I'm sure you'll be able to find a channel somewhere which focuses on your own special niche!

Thanks to a timely email from Curt, I was reminded of the approaching advent of the 5th Annual Analogue Hobbies Painting Challenge. For some reason I had missed his post inviting all comers to this annual internet frenzy of painting. Thanks for the electronic nudge, Curt!

This year the theme is Anti-Heroes and with 72 entrants from 13 countries, it really is a behemoth of global proportions! I can see the possibility of Ned Kelly featuring as a particular Antipodean Anti-Hero! I may have to try my hand at a little conversion work...

This time I don't have the looming deadline of the annual January game as we will be fighting Waterloo for the second time (the first time was the year before I joined the club), so the required figures are all ready to go.

Even though I don't have a big project to power through, I do still have some things on the go like my Wurrtembergers.

So my plan for the Challenge will be to paint:


I have put my name down for a target of 400 points, and have no idea whether or not this will be too ambitious a target or not! I suppose I could just do a little bit of maths...........Nah! Why break the habit of a lifetime? I'll just wing it and see how it goes! 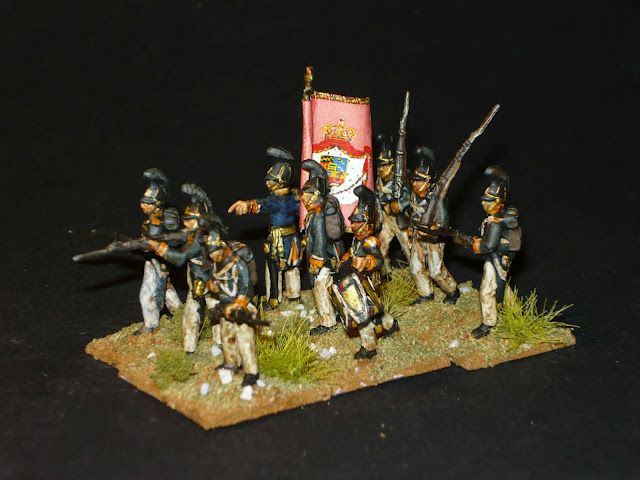 It's been an age since the last time I posted anything to do with my figures. To be precise, the 26th of September was the last post which featured a new unit off my workbench!

To make up for that dismal record, I give you not one, but two, new units! I give you the 1st Battalion of the Herzog Wilhelm Regiment (the battalion I painted earlier was actually the 2nd, more on that later) and the Fußjäger Btn Nr.1 König.

According to Napflags, previous to 1806 the Württemberg army were issued with the 1798 Ducal colours. After 1806, when the duchy was upgraded to a kingdom, 6 new regiments were created by adding a second battalion to the existing musketeer battalions, with the new battalions being issued new Royal colours while the original battalions retained the old Ducal colours. So this battalion I've just finished are sporting the 1798 Ducal colours and the previous one I painted have the 1806 Royal colours. I've been told that the Württembergers didn't take their colours into battle anyway, so it's all a moot point anyway! I don't care, because a big flappy flag is just the cherry on top of painting a battalion, in my humble opinion and button counters be damned I say! :) 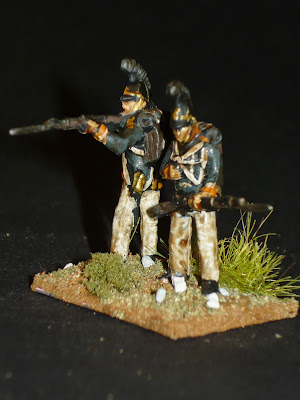 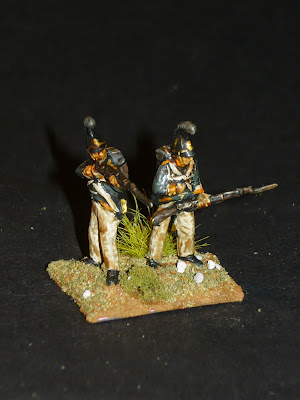 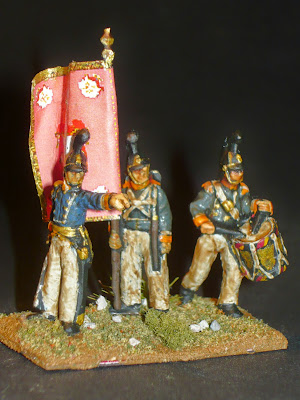 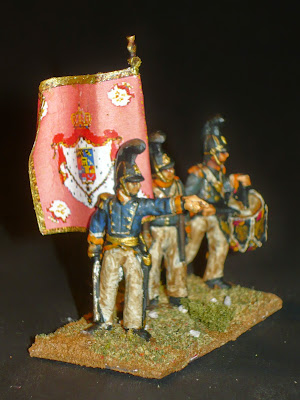 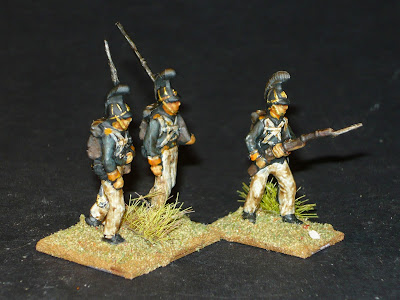 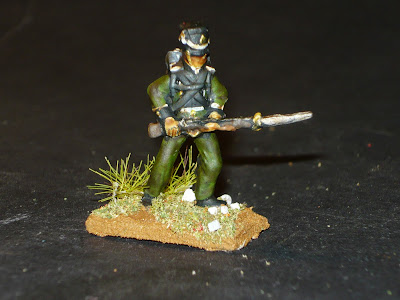 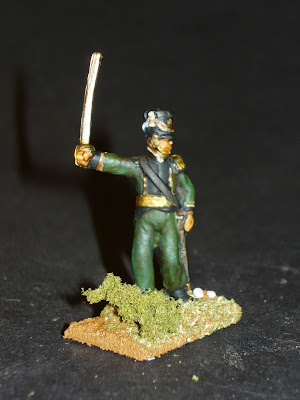 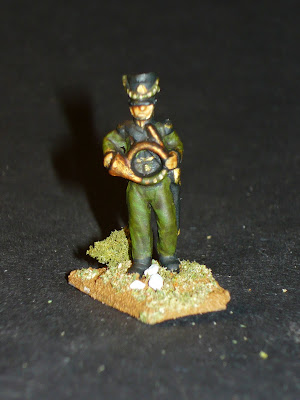 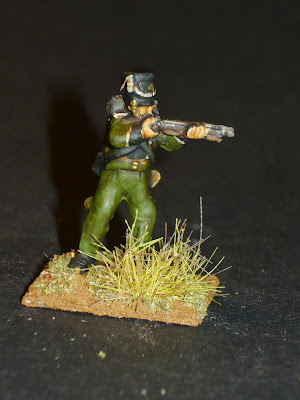 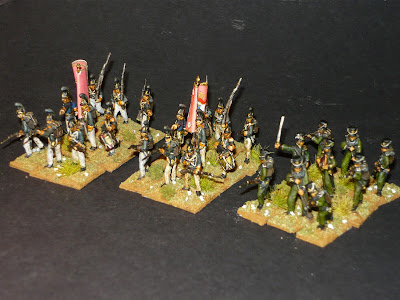 Email ThisBlogThis!Share to TwitterShare to FacebookShare to Pinterest
Labels: Remembrance

It's Just Not Cricket! - Another Peninsular Battle

This was the Friday meeting after the Saturday where we found out the news of Pete's passing, and the funeral still hadn't been held, so a lot of us (myself included) still couldn't actually believe he wasn't going to be around anymore.

Anyway, the best thing to honour his memory was to keep on on keeping on and to try and kill a general or two!

As you can tell by the quality of the photos I forgot to bring my camera and had to rely on my phone for the pictures. I also didn't check the contents of my army box and realised when I was setting up, that I'd left my British cavalry at home! D'oh! 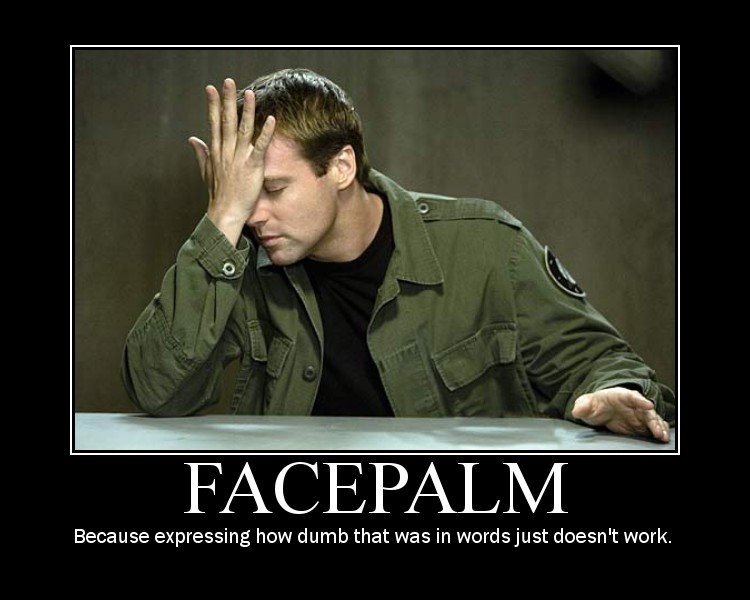 Anyway, my partner for the game, Garry, lent me some of his Dragoon Guards (downgraded to heavy dragoons) for the night, and I boosted my numbers with some more infantry, I just hoped that that wasn't going to be a fatal flaw in our game!

Garry and I faced Andrew S., Tim and John R., so we had our hands full! Garry faced Andrew, who seemed to have the bulk of the French forces on that flank. Tim had a force of mainly light infantry in the centre, and John had a small holding force on the French right. However, he had a large cavalry force, which kept me focussed on that flank, while Tim advanced in the centre, taking his time and picking his target.

It eventually turned out that his target was me! I held a building which was key to both flanks of my division. To the left were the battalions keeping John in check and to the right were my best troops, the 92nd Gordon Highlanders and the 71st Glasgow Highland Light Infantry, conforming to the line of Garry's division, which was steadily falling back under pressure from Andrew's troops.

In the end, Tim forced my battalion out of the building they were holding, but my highlanders were able to fall back without much trouble. The charge on my line which inevitably came was stopped in its tracks by disciplined fire. On the left flank, John pressed in with a combined arms attack, forcing me into a defensive position. After eventually throwing away my dragoons in an ill-advised charge on a closed column supported by artillery, his cavalry came on and broke a couple of my British line battalions. I still had an untouched Portuguese battalion to throw into the fight and my Scots battalions were still showing a lot of fight, so I wasn't in any way defeated by the end of the game.

Garry had been pushed back almost to the edge of the board, it looked like, but he was gearing up for a counter punch, already having sent his cavalry at some unfortunate limbered French artillery, scattering them to the four winds!

It ended with Garry and I pushed back, but certainly not beaten (though our opponents might view it differently!)