A long time between posts! Real life has been a bugger lately and there's not been much time for hobby-related stuff, or, indeed, blogging.

I've been chipping away at my British Peninsular War project, this time painting up the 39th Foot using the long-awaited, finally released Emhar British Infantry set. And a corker they are, too! The detail is a lot finer than what I'm used to with HaT, more reminiscent of Italeri. Although there isn't the loss of detail Italeri is prone to suffer in more animaterd poses. Speaking of animation, these figures are rather "athletic" in some of their poses, but not ridiculously so as Esci and Italeri are prone to. The detail is very difficult to follow if you don't pay close attention, but the results certainly pay off if you do.

My one gripe is that there are no elite figures represented in the set. I had to make a couple of paint conversions to create the shoulder wings on a grenadier and light-bob figure each.

I added the flag bearers from the HaT British Infantry Command set to add the requisite vexillogical colour. It's so much easier and more convenient to have purpose-made figures than to faff around converting or using metals which aren't really that compatible. These ones have finials and even cords! Very swish! I still have to tidy up the edges of the flags which are still a little ragged. As always, I've used the generic British infantry flags form Warflag. I haven't had the time or inclination to try to add the proper numbering, but one day I might update all my British flags. 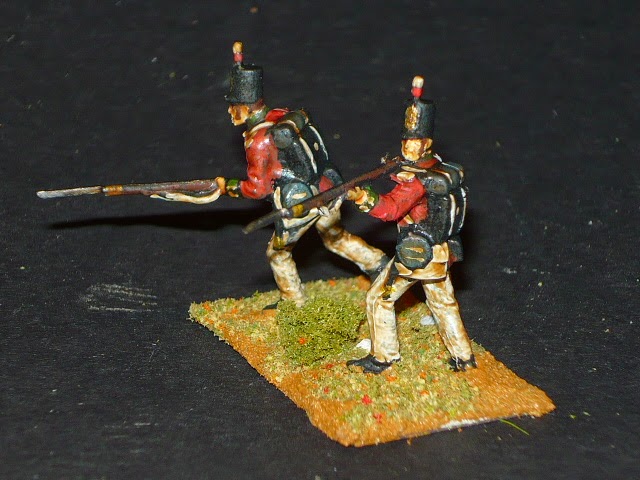 PS. The 39th followed their Napoleonic service with a stint in the Antipodes from 1825, serving in New South Wales, Van Diemen's Land and the Swan River Colony, after which they headed for India in 1832.


In preparation for our big 200th anniversary re-fight of the Battle of Waterloo next year, we decided to play the Battle of Quatre-Bras to see what flow-on effects it would have on our game. As it was the smaller of the two 100-Days Campaign battles, we decided that this would be the one to experiment with first.

As we have previously fought both Quatre Bras and Ligny previously, we had the troops and terrain all ready to go. All that was needed was to get everyone organised to be at Tim's place and away we would go! Unfortunately I could only attend for the Saturday, and after getting there later than I had hoped, took charge of the Brunswickers.

With the French under Tim and Darren pushing the Dutch-Belgians back through the Bossu Wood and straight up the road to Quatre Bras, Paul (Prince of Orange) and myself as the Duke of Brunswick were under heavy pressure. Jim, as Picton, had the left flank but was under a lot of pressure himself with a lot of cavalry moving around to turn his flank. With Robin facing him, he withstood the French assaults, as Robin's dice rolling assumed its usual abysmal qualities!

I managed to get the Duke captured when I attached him to a disordered Hussar regiment that got charged by French cavalry. As they were particularly disordered, I refrained from counter-charging and attempted to empty a few saddles with carbine fire. As the french were charging out of rough terrain, I gambled that the resulting disorders and a potential casualty, coupled with a hopeful good die roll, would not result in disaster. I should have left them to their fate as I didn't hit anything, then rolled poorly while Darren rolled well. The Hussars were smashed and as the Duke was attached, he then had to pay the price. Rolling the d10 resulted in him being captured, which is an improvement on history, I suppose!

By the time I left on Saturday night, Alten's Anglo-Hanoverian division had entered the board in the nick of time as the Dutch-Belgians had failed their divisional morale test after the majority of their units were in bad morale. The French had seized one of three built up areas in the village of Quatre Bras, and had a lot of fresh infantry and cavalry entering the board. The remaining Brunswicker regiments also appeared, but it looked too little, too late!

All the images were kindly supplied by Darren B. and Robin, as I forgot the SD card for my camera!

The following is a summation of the day by Darren B., who is the driving force in the organising committee for Waterloo 200:

An interesting comparison in the attached files is the number of figures present at Waterloo vs Quatre Bras. With the casualties about the same, different units suffered more casualties in our refight to those that actually did but whether we apply those results to Waterloo is debatable. For instance, at Quatre Bras, the 2nd and 3rd btns of the 1st Guards had a strength of 17 & 18 figures respectively but at Waterloo, they had 13 & 14 figs as a result of being run over by the French Chasseurs, but in our refight, they didn’t see any action at all. The 2nd btn of the 44th however suffered over 60% casualties in the refight but in actuality they had the same strength at Waterloo as at the start of Quatre Bras. A bit of tit for tat. The 9th British Brigade suffered a lot and that is reflected in the starting number of figures for Waterloo.
The casualties in the artillery would not affect Waterloo at all as most of the batteries present at Quatre Bras were not even used at Waterloo.

What can one say about the result of this refight. There would not have been enough time for Ney to send part of D’Erlons Corps to Ligny and complete the Prussian rout. There would only been about an hour’s daylight left to chase the Allied force but because of the traffic chaos in the allied rear with the baggage train on the road to Waterloo, the French cavalry would have swooped down on it and caused havoc. Were the Allied supply trains on the road. This would surely have some effect on ammunition supplies for the allies and the creature comforts of the Officers and men of the army causing a bit of demoralisation and fatigue perhaps."
Posted by Ben Gilmour at 10:06 PM 4 comments:

I know it's last week's news, but I thought it appropriate to mention here the passing of comedy great Rik Mayall, may he rest in peace, the utter, utter, utter bastard! WOOF!


Editor's note: I have no shares in Bombardier, or have even tasted it! These ads just feature one of my favourite comedians in Napoleonic get-up. Bang on!
Posted by Ben Gilmour at 1:41 PM 7 comments:

Email ThisBlogThis!Share to TwitterShare to FacebookShare to Pinterest
Labels: Life, Off topic

I've had this in my to-do pile since last October, and after seeing the fun had by the chaps at Little Wars playing Legends of the High Seas I thought it was time to start assembling her.

I'll be able to join in their shennanigans as well as adding a little colour to my own Napoleonic naval landing scenario I ran for Pirates in Septmeber last year. I'm thinking of using Capitan rules for the infantry combat, but I'm still weighing my options for the naval side of things. I'll see how the LotHS plays and if I can adapt them to my purposes, or I might invest in the Gunboat rules by Capitan made especially for these boats. I reckon I'll have to invest in another one of these boats eventually so that we can have proper naval battles and cutting out expeditions and other sorts of Hornblower-type derring-do on the table-top!

This model is supposedly for 18mm figures, but the boats also come in 28mm sizes, too. If I've piqued your interest, you can learn more here 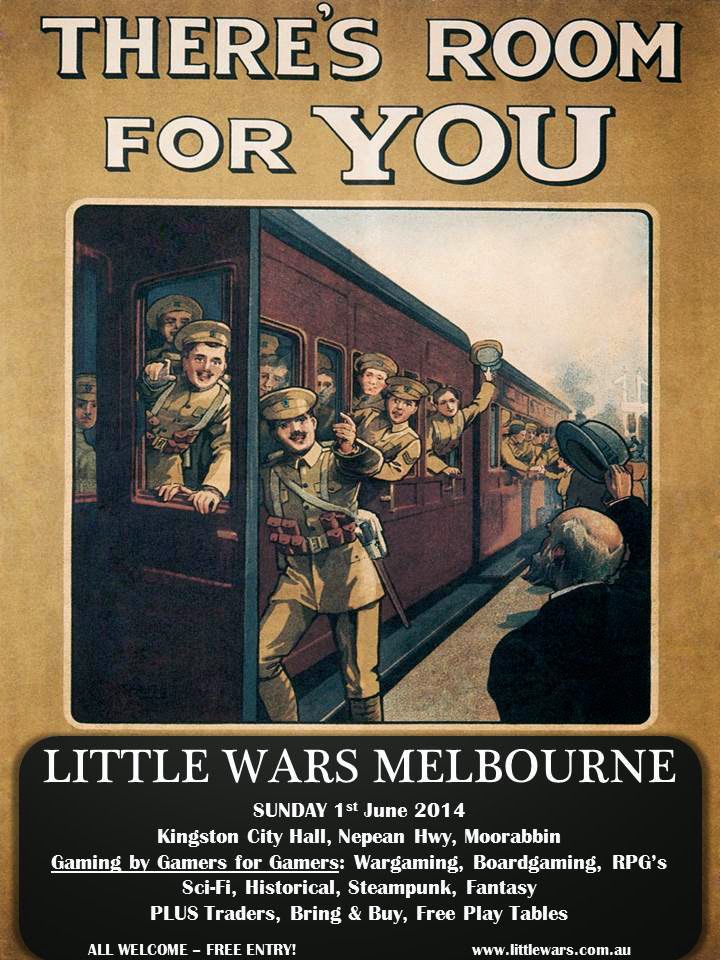 Yesterday I ventured way down south to Moorabbin  (with a slight diversion through the wilds of Caulfield while I got my bearings!) to attend Little Wars, Melbourne. I managed to get La Petite Rosbif #2 to accompany me, which was surprising, but as Mrs. R. was working and La Petite Rosbif #1 was swotting for exams I think she thought that as there was nothing else on offer, she might as well indulge her old man and come along for the ride!

Besides our annual NWA Open Day I hadn't actually been to a proper, grown-up convention, so I was looking forward to it. While not as spectacular as some of the northern hemisphere shows like Salute, or Crisis, the floor was still busy by the time we finally got there in the mid-afternoon. NWA membership was conspicuous by the number of club members wearing the club t-shirts and the number of games and stalls they ran, which could only be a good thing for recruitment. Well done, chaps!

I had an ulterior motive to being there, as I was going to pick up my Eureka Anglo-Saxon archers for my SAGA project from Nic, who was doing a roaring trade and chatting to all and sundry. Very nice they are, too. They'll be added to the painting queue on the workbench to pad out my missile-weapon fyrd.


Walking around the tables, admiring the games on display and taking happy snaps, we were bailed up by Tony F. from the club to join in with Neil G. and Neil H. and in their WWI dogfight game, using the Canvas Eagles rules. I've seen this played at the club and it always seems to be a ton of fun. This time, they'd organised a scenario where the Allies had to down the zeppelin and the Germans had to defend it. La Petite Rosbif #2 and I decided to join the Allied side and see if we couldn't bag the Hun! We were going to share a plane, but she decided that she'd go it alone a pilot one all by herself. You should have seen my fatherly pride! We both took a DH2 fighter each, and faced off against a gaggle of Fokker Eindecker escort fighters. Tony took a Nieuport 24 (I think; WWI aircraft aren't my strong point!). Neil took another DH2 as well.

I decided that we would concentrate on the fighter escort first, then see what happened. La Petite Rosbif #2 followed in my wake, like a good little wing-man (wing-girl?), directly at the despicable Hun! In my first and only combat I managed a long burst which slightly wounded the enemy pilot, while he landed some damage on me which set the engine smoking. Both of us managed to jam our guns as well! I spent the rest of the game desperately hoping I wouldn't burst into flames, as the smoke proved to be persistent, and trying and failing to unjam my guns. PR#2 then gave the Hun a squirt with her guns, landed a couple of hits and managed to fly on intact, without jamming her guns!

Now the fun began as the German escort had flown past, we had a clear shot on the giant sausage! I had to fly straight and level to attempt to clear the guns (failing each attempt!), while she straightened up and went in on the attack! She got within almost point blank range and...missed! On the other side, Neil had a lot more success and with a close range burst blew the whole thing up! No-one was shot down or crashed, but there was a lot of fun had in a very quick game.

Thanks to Tony and both Neils for hosting the game and stepping us through it.

"Crikey, sir. I'm looking forward to today. Up diddly up, down diddly down, whoops, poop, twiddly dee - decent scrap with the fiendish Red Baron - bit of a jolly old crash landing behind enemy lines - capture, torture, escape, and then back home in time for tea and medals." - George, Blackadder Goes Forth.


For those of you in South Australia, mark this date in your calendar! 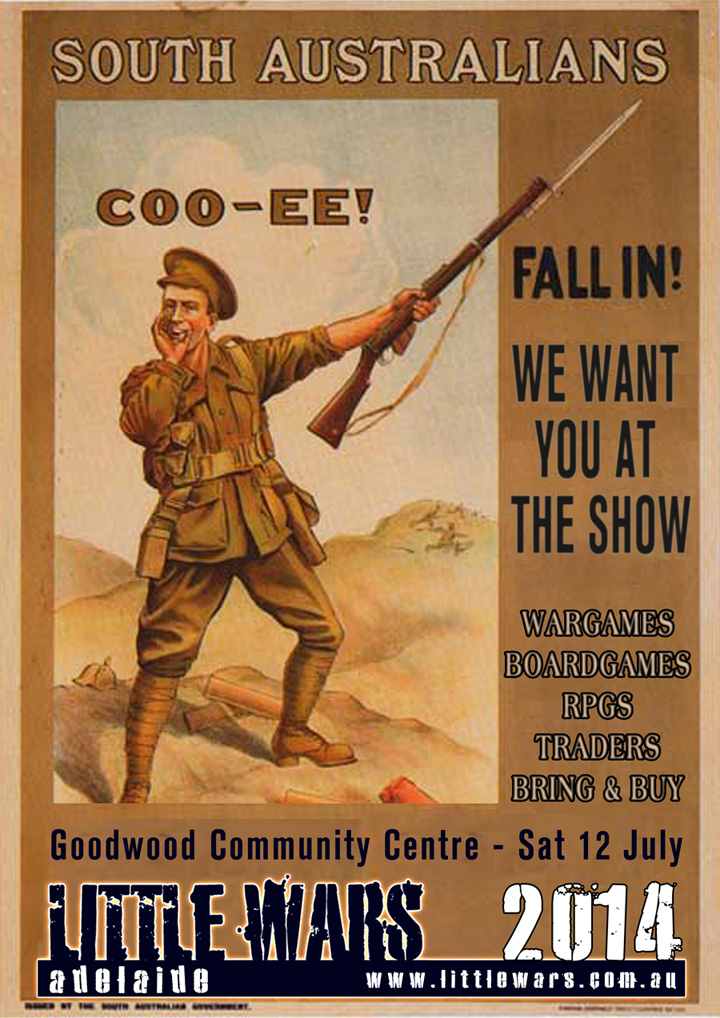