I found this on the Guardian website recently: Hugh Grant reading the Duke of Wellington's Waterloo dispatch as delivered to the Prince Regent by Major Harry Percy of the duke's staff.

Hearing it read out in a plummy voice really adds atmosphere that reading it yourself can't quite convey, especially when recounting the casualties. 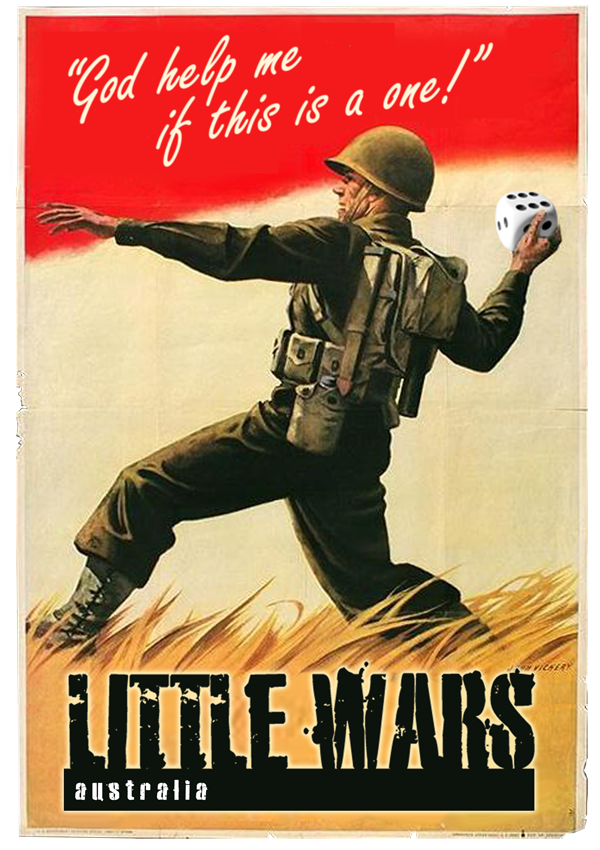 Yes, it's that time of year again; Little Wars 2015 in Melbourne is on again tomorrow. I'll be going again with La Petite Rosbif #2 to sample the games and wares on offer. Besides the Melbourne session tomorrow and the Adelaide event in July, there's now a new event in Canberra in November. So for everyone in SE Australia, there's an event for you. No excuses now!

Posted by Ben Gilmour at 7:23 PM No comments:

As May 8th was International Viking Day (yes, it's a real thing), it was decreed that the club meeting that day should be given over to all things Viking!** RAAAHHHHRRRRR!!!! So in the spirit of the day I selflessly put myself at the disposal of Viking types to have a go at with my longtime Welsh SAGA project which had finally come to fruition after a sluggish mojo-less period of little to no painting (Refer to a previous post for more detail!).

Anyway, after issuing the challenge, Ian KH (of This 28mm Life) accepted and agreed to meet me on the field of battle. This turned out to be a lovely little 3' x 3' battle-board which was more like a mini-diorama, made from mdf and polystyrene, covered in plaster and a generous coating of flock. It even featured a little pond at the foot of a cliff.

We were both very rusty on the game mechanics and not familiar with our battleboards, so our first game was a little hit and miss. Still, I can't complain, as my new Welsh warband turned out victorious after my Warlord killed his! I found the benefit of the Welsh Holy Ground ability, which reduces the enemy's move to the next lowest distance ie. L to M, M to S, etc. When the Vikings bowled up expecting to contact one of my units, a judicious use of Holy Ground stops them short and allows my unit to piff pointy sticks at them and bugger off next turn!

The second game didn't go quite as well, with Ian wise to my tricks, though I did manage to destroy one of his Bondi units. When it came to the crunch, this time he dealt the killing blow to my warlord, though it was touch and go for a while.


*"Come and have a go if you think you're hard enough!" in Welsh according to Google Translate!

**(Rather disappointingly, we were the only SAGA game that night, with only one other table joining in the Viking-ness of the night playing a FoG game. Everyone else seemed to have missed the memo...)

Lancers on Début or, Robin's Dice - My Secret Weapon

I'd issued a challenge for the last Friday meeting to take on an opponent and Tim took up the gauntlet. He'd accepted the challenge before I'd made the last post revealing my latest unit, so a couple of cryptic emails were all he knew of the period and area they operated in. Accordingly, he prepared a post-1811 central European opponent for me: Austrians post 1812.

I arrived at the club (late as usual!) and found the table all set up and Andrew S. and Robin had joined the game. All the better! I now had Andrew to partner me and Robin to face across the table, having borrowed 1200 points of Tim's Austrians.

Everything stared to plan, with the French winning the initiative roll and getting to move first. My hussars moved into the woods on the right, planning to outflank and threaten the advancing Austrian infantry. The rest of my force remained in a compact formation, ready to take on the massed blocks of the big Austrian battalions. The thing is, though, that Robin wasn't sticking to the plan; instead of advancing in big infantry blocks and conveniently allowing himself to be flanked by my cavalry, he advanced in a huge extended anchored line which threatened to outflank me! On my other flank, Andrew had occupied a BUA which linked our two forces, and protected my left flank. Tim was maneuvering to attack it and be in a position to threaten my left in support of Robin's attack.


However, Robin's first attack came in the centre. I'd tried to make an anchored line of my own, but misjudge how far forward the anchoring closed columns were, so by the time the centre column moved up to form line in between, it was more or less at the rear of the formation with the columns sticking out to the front. Robin hit the right hand column without being impeded much by supporting fire from the line. In the ensuing combat, he scored a Pyrrhic victory, forcing the column to retire. His follow-on, though, took him into the line which didn't fare so well and broke to the rear! he then charged the remaining column of the anchored line, but in a comedy of errors we both rolled appallingly badly and the combat ended in stalemate.


That was a sign of things to come for poor Robin: his giant column of uhlans charged at one of my infantry columns which happened to make it into square in time, but in his pre-melee roll, Robin completely flubbed it, causing the cavalry to flee from the battlefield!

I then tried another attack in the centre against his massed columns with fresh troops moved up for the purpose. He met me in a counter-charge ending in a stalemate, which was fine by me. His infantry now lay with an unsupported flank for me to try and exploit. Before I could, though, he sent the long anchored line in to attack my right. I counter-charged with 3 battalions which seemed a feeble thing to do looking at the monster line overlapping them. Things looked crook when my pre-melee roll saw me halt at 2" from the enemy with 2 disorders. it looked like I was going to get swamped by the oncoming wave! However, his pre-melee rolling was even worse and in a cascade of incompetence, his battalions broke and ran! Well and truly dodged a bullet there! My hussars now went into action, charging down one of the fleeing infantry battalions and threatening to envelope a battery of horse artillery. They successfully limbered and carried away their guns, but couldn't use them against me any more. One of Tim's columns which had been waiting to take Andrew's BUA now had to go into square, preventing them from attacking the buildings. All in all, a satisfying course of events!

That allowed me to concentrate on the remaining Austrians, but with my troops in a bit of disarray at this point, I first had to get them into the right position. My artillery now took up the slack, moving into close range and pummeling the huge columns. In the meantime, my lancers had moved around to the centre, formed line and awaited their moment. Tim tried to ease the pressure by attacking the BUA with only two columns of grenadiers, while the third held the flank in square. His attack was repulsed by Andrew as he couldn't muster the crucial 3:1 odds that would normally guarantee victory.

Robin tried to withdraw the two columns stuck out in no-man's land, but could only save one. The other had nowhere to retreat to so he voluntarily broke it, which saved me the effort! Then it was time for the lancers to do their thing. I charged them at the infantry in front of me; the line infantry managed to form square, but the nearest Grenz unit didn't. After taking casualties from close range artillery and infantry fire, the lancers smashed the Grenz unit and continued on into the square. In a creditable performance, they only just failed to break the square. With only three infantry battalions and a foot battery left, Robin's divisional morale test saw him leaving the field to me. By this stage Tim had finally managed to evict Andrew from the buildings on my left, but it didn't matter. With Andrew and Tim fighting a stalemate on their side, and me owning the field on the right, it was a French victory, though with much of the credit going to Robin's dice rolling, rather than my tactical brilliance!