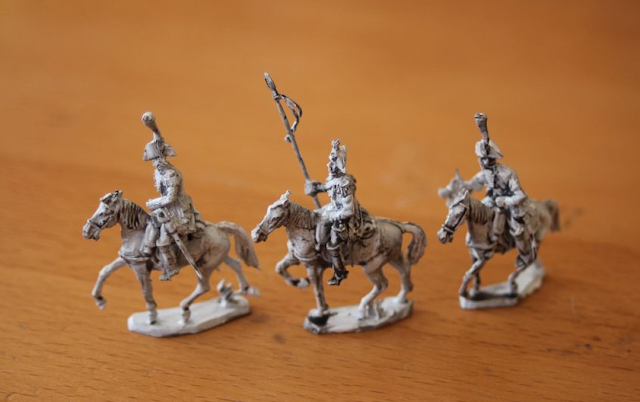 Got myself some of these lovely figures from Hagen Miniatures (which were commissioned by none other than MS Foy of Promotheus in Aspic fame). I bought one pack of the command set and  two of the troopers. Like all metal figures shipped to the Antipodes from the other side of the world, once shipping costs were added, the costs caused a sharp intake of breath! However, as there aren't any other Spanish cavalry commercially available in my chosen scale, it's either time consuming conversions or pay up.

I feel my Spanish forces need a little stiffening in the cavalry department to make them a well rounded force. Not that it really matters as Spanish cavalry really are rubbish in our rules (although in my latest report to come, my Spanish cavalry punched well above their weight in an awesome display of derring do, so stay tuned, folks!)

Below is an image of Spanish Line Cavalry by the Spanish artist Dionisio Alvarez Cueto which I'll be using as a guide for these figures. I rescued this lovely piece of militaria from the cupboard under the stairs at my father's beach house. He's moved down there permanently and has had to cull a lot of stuff from his other house to fit into the new one, and had always intended to give this to me, but somehow we never got around to managing the transfer!

It's a painting by renowned Australian naval history artist and RAN veteran Dacre Smyth of HMAS Patricia Cam, a coastal supply ship based in Darwin during the war. Apparently Grandpa commissioned the artist to paint the picture after getting in touch with him to tell him his story. Grandpa was a Chaplain in the Royal Australian Air Force (RAAF) and part of his duties during his posting to Darwin was sharing the pastoral duties with chaplains of other denominations and other services out in the Tiwi Islands. The islands were used as a early warning station for incoming Japanese air raids on Darwin and other communities in the Top End. With these raids in 1942 and 1943 Australia suffered its first and only attack by a foreign enemy. While the attacks pale into comparison when compared to the devastation suffered elsewhere, they certainly heightened anxiety in Australia, especially at a time when Britain was not surprisingly more concerned with home defense and the US had still to make its presence strongly felt in the Pacific War.

The Fighting Cocks of the Army!

Club games started this past weekend, so I thought I'd give my Anglo-Iberians a run for the first time this year. Robin said he was coming with his French, so I challenged him to a game. He gamely picked up my thrown gauntlet, so we settled on an 1813-14 Peninsular War encounter. I had a mixed Anglo-Iberian force of 2 brigades of British troops, and one each of Portuguese and Spanish (the Spanish were there mainly for comedy relief: Spanish cavalry? Pfff!) and cavalry and artillery.


I won the initiative, so of course I set about marching my British troops to the nearest ridge line on the left, while my allied troops held the line in the centre and right flank. I had no great expectations for the game, even though I was up against Robin and his notorious bad dice mojo, as I seem to still not really know how to play the brittle British line tactics to their full potential. Especially if my opponent plays aggressively en masse, which is the only way to play the French when facing the British, and which Robin was sure to do.

Sure enough, he started off VERY aggressively when I moved my small dragoon regiment in the centre, throwing out a vedette to see what was over the other side of the slope to the front. His own vedette spotted the movement and the plucky Chasseur commander ordered an opportunity charge on my dragoons. For the worst cavalry in the French command to charge the best cavalry in the Allied command was a fairly ballsy act, to say the least. I think he mistook them for my Spanish cavalry and was licking his chops at an easy victory. Still, it could have gone a lot worse for him as he rolled very well in his melee, while I didn't. Even though he was charging and I was caught mid-manoeuvre, he still only managed a draw, forcing us both back to our starting points with disorders. If I'd rolled better, I could have really mauled him! Anyway, that stopped things in the centre for the moment, while he brought up his guns and formed up his brigade into closed columns. I was expecting him to launch a charge at the cacadore line in the walled field, which could have been dicey, so I positioned one of my reserve battalions to threaten the flank of his approach and kept the dragoons back as well.

Things seemed stabilised in the centre, so the left flank became the next area of contention. Robin occupied the farm buildings on his right flank to stabilise his flank and then marched his brigade up on to the ridge, dislodging my artillery battery, who felt discretion was the better part of valour. My skirmishers bested his, then peppered his columns with a disorder or two, for added effect. This is where I decided to act more aggressively than I usually would have; our rules have the option for a fire-fight, which is where the active player marches his troops up to the enemy and engages in a brief intense exchange of fire at one and a half times their usual fire factors. As both the units I activated were some of my best, the firepower unleashed on his frontline was devastating. I usually either forget about the firepower option or act too conservatively, but this time I'm glad I took the option! It stopped his advance in its tracks and forced him to retire back to his starting point, while I kept control of the ridge. Huzzah for the Thin Red Line! (Robin's never been too happy with the firepower of British infantry in our rules; in this instance the equivalent of roughly 300 individual soldiers in his brigade were made hors de combat in that one exchange of fire. Still, he took it on the chin and carried on sportingly.) He soon found success in the centre, charging the buildings occupied by one Portuguese battalion and expelling them in a short, sharp combat.

The pickings seemed a lot better on his left flank where my Spanish brigade were poised to be swamped by a wave of French horseflesh. The Portuguese shook out into line to link the Spanish to the centre and not allow the French to outflank their Iberian neighbours. I transferred the British dragoons over to that flank and brought my Spanish cavalry into the gap between the Portuguese and Spanish infantry. I came to regret that decision, as there wasn't enough room to deploy either unit into line. I then sent the Spanish dragoons across the face of the infantry to the right, hoping to get them into a position to threaten the advancing French dragoons. I ran out of functions in that turn to face them towards the threat, however, so they were presenting a nice juicy flank to the enemy instead! Thankfully I'd got the Spanish infantry into an anchored line, so when the inevitable happened and the French dragoons squashed their Spanish counterparts, the infantry were prepared and were only forced to retire in the ensuing combat, which I thought was as good as a victory!


That was the signal for Robin's own anchored line to charge the Portuguese line to his front. My British dragoons charged his nearest closed column, which although resulted in an inconclusive draw, prevented them from joining in the charge on the Portuguese. Those doughty infantry unleashed a defensive volley, which, combined with the aforementioned cavalry charge, ruined their momentum and resulted in the charge failing! Huzzah!


To keep the momentum up, the cacadores advanced on the line to their front and engage them in another firefight. This also had a successful result, sending the French into retreat. My success had left the cacadores' flank open, so I had to rush the nearest Portuguese line up to cover the hanging flank. I fired on the nearest French column and caused a casualty, which had the added bonus of forcing a morale check which was duly failed. Another French battalion retreating! Huzzah! My Portuguese infantry were earning their pay this day! Just to rub salt into the wound, Robin charged a single battalion at my horse guns. My gunners weren't to spooked this time and stood to their guns, firing a volley at very close range, which devastated the head of the column and caused another failed morale test! The third enemy battalion sent into retreat! Huzzah!


Robin got a measure of revenge when he charged the remaining Spanish infantry closed column with another of his battalions. My hard-working dragoons opportunity charged his attacking infantry, but had too many disorders and were sent reeling, allowing the French to smash the Spanish column. Unfortunately for Robin, the victorious battalion then got their blood up and went battle-mad, careering into my rear, where they were never to be seen again after one of my recovering units advanced onto their flank.

By this stage, neither of us had the upper hand: I could swat every attack he launched, but had no reserves to exploit his failures, and while every attack he launched caused me damage, he also had no reserves to exploit the damage caused. He held the advantage in cavalry, though, and was slowly forcing my far right flank with weight of numbers. His dragoons on my right flank also only had Spanish and Portuguese infantry squares to hold up their advance. As it was we called it a draw with the honours shared, my Portuguese brigade being mentioned in dispatches!