While I get Austerlitz Part 2 sorted out, I will reward your patience with some photos of the first units to come off the production line for 2017.

The first is the 2nd battalion of the Neapolitan 4th Regiment of the Line. This has been a long time in coming as it's been on the go since October last year! Again, the figures are from Italeri set 6066 with one of the voltiguers sporting a Lancier Bleu pokalem-wearing head. The next unit in this project will be the yellow faced 2nd Regiment of the Line which was an exclusively Afro-Caribbean regiment, reputedly the worst in the French army until it was transferred to Neapolitan command during Joseph's reign when it became the best without any change in performance! 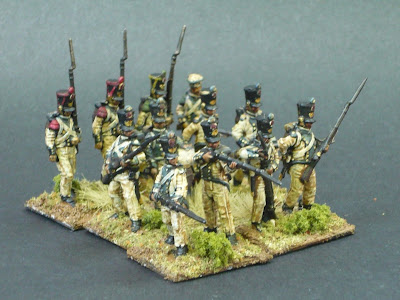 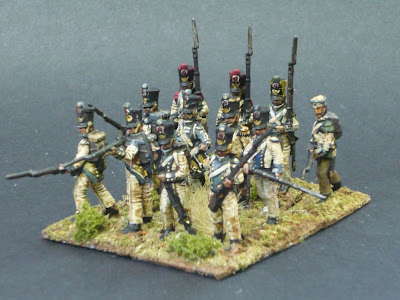 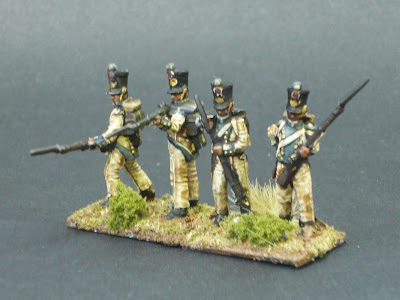 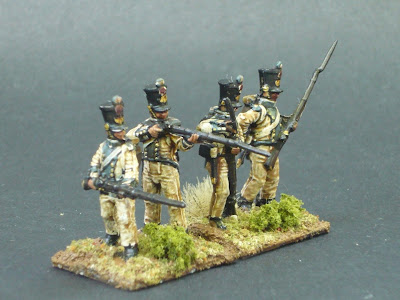 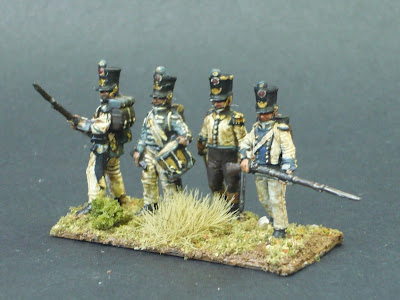 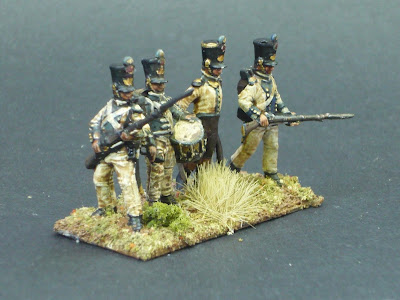 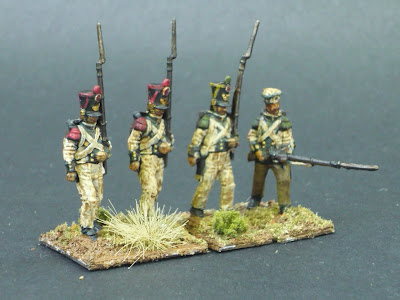 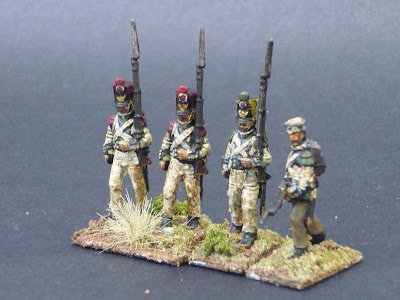 The next unit off the painting desk is the Spanish cavalry regiment, the Lanceros de la Legión Extremeña. I have found quite a few pictorial references, some of which are featured below from my Pinterest archive, though not much seems to be known of their battle record. It seems to be one of those hastily organised regiments which popped up and then disappeared soon afterwards in the period before 1812.

As their uniform is so similar to a French uniform, they cried out for a conversion project using the Waterloo 1815 French Line Lancers, similar to the one I did to create the Neapolitan Chevau-Leger regiment. This time, as well as using shako-wearing heads from the old Italeri French infantry set, I also used horses from the Italeri French Dragoon set. The colour-bearer has a head from Lancier Bleu and one of the lancers has a bear, bandaged head from Franznap.

The Waterloo 1815 set has a drawback in that there aren't enough lances for every figure with an empty hand. I had to use piano wire to create lances for the two figures with outstretched arms, and the lance pennants out of paper. I think the pennants are a little large and may require replacing, if I can be bothered. Likewise, the colour requires some sort of finial, but I'm not sure when I'll get around to it! Maybe I should just paint the tip gold and be done with it.

The colour and the bugler's uniform are entirely speculative, so if anyone has any has any further info on this unit, I'd be happy to hear from you. 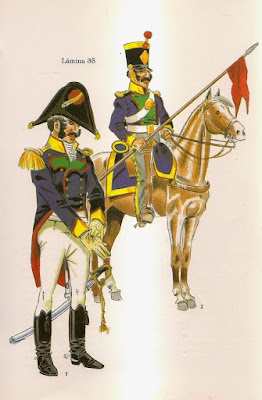 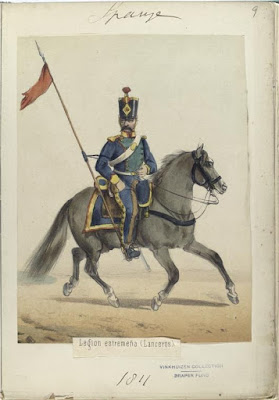 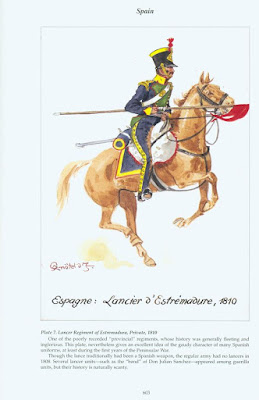 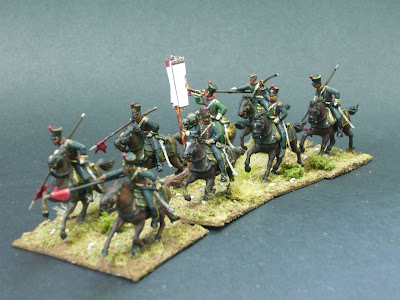 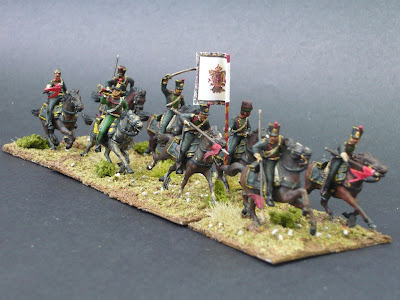 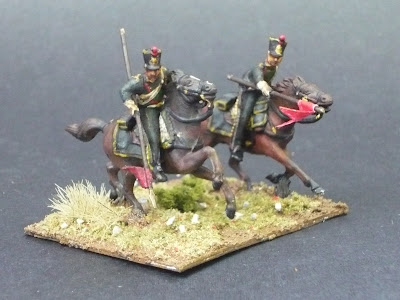 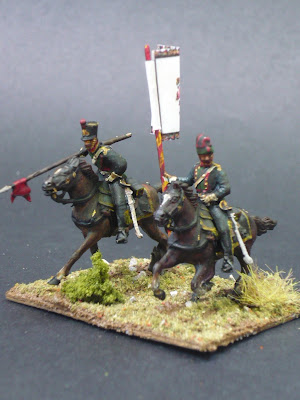 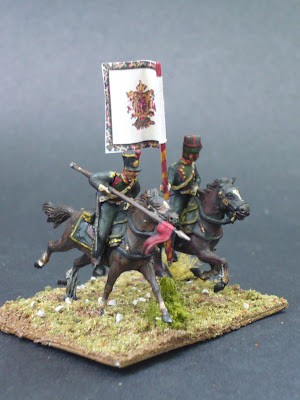 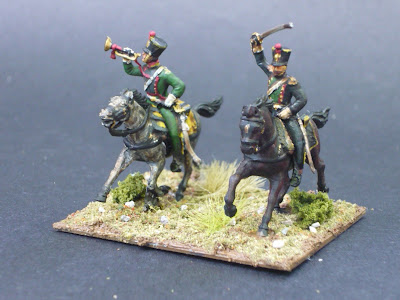 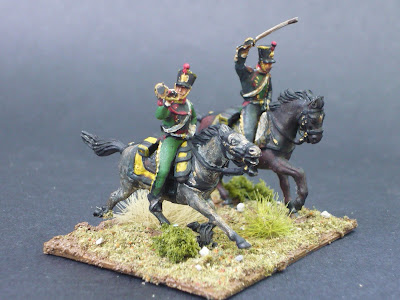 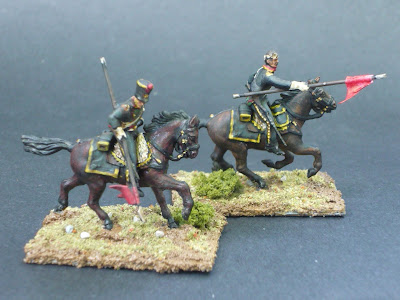 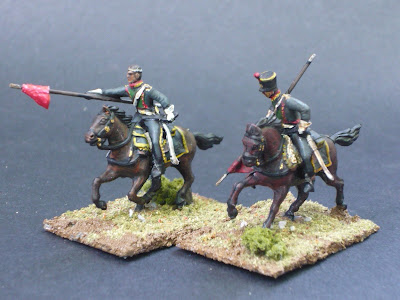 With the increase of Spanish cavalry in my collection, it's time I had a cavalry commander to try and prevent them routing off the field when they inevitably break! Below is my version of a senior Spanish officer based on images of a brigadier from Napoleon's War in Spain by Lachouque & Tranie using a figure from Italeri set 6016 with the epaulets and aiguilettes removed and a Lancier Bleu head added. 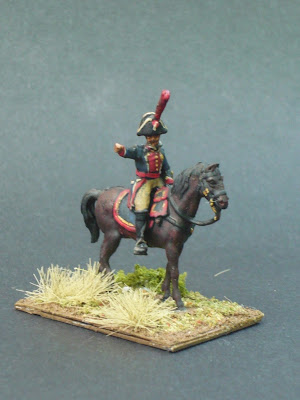 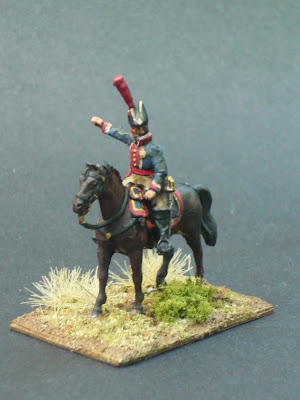 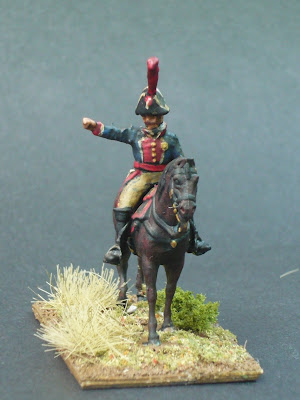 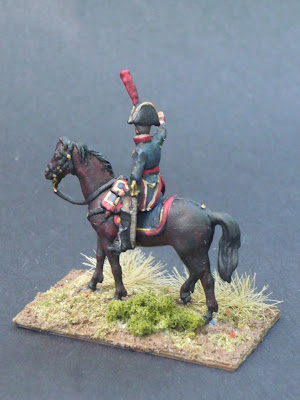 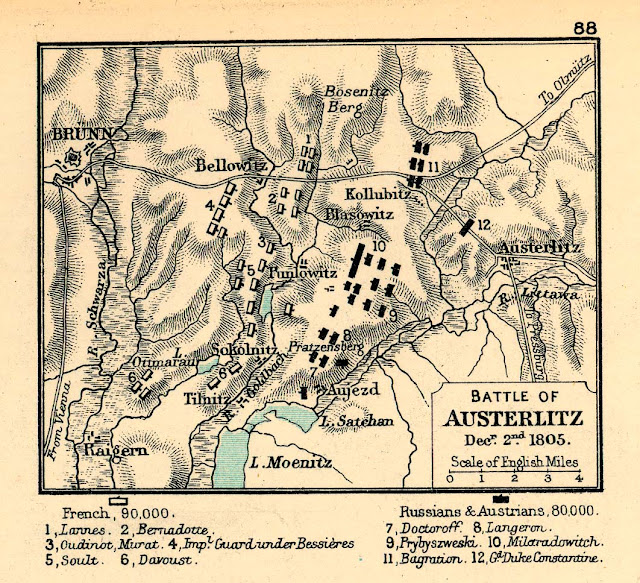 Our Austerlitz game started with the historical units following the orders they received for the first few rounds until contact was made, then all bets were off! As Langeron, I commanded the Allied 2nd Column in the south with orders to support the 1st Column and Advanced Guard in their sweep around Telnitz (Tilnitz in the map above). My area of operation was between Telnitz and Sokolnitz, while 3rd Column (Prybyszweski) was to support my right flank in the area north of Sokolnitz. The columns to the north were to pin the French while the southern columns carried out the grand sweeping maneuver northwards. All well and good if only the French cooperated and stayed where they were...

Another factor was the fog in the Goldbach valley. If you look at maps showing the march routes of the 1st, 2nd and 3rd Columns they take an inexplicable detour well to the south before turning west and north. Once the fog was laid down on the table you could see exactly why that was the case; all 3 columns marched around the cloud of fog to avoid bumping into each other and getting completely disordered, something I should have paid heed to!

The Allies got to move first, with each commander rolling dice to determine their starting turn. The Advance Guard, naturally, managed first move on turn 4, while 2nd Column got the go-ahead on turn 8. However, only the first 3 brigades got to step off on that turn; my 3rd brigade moved on the following turn. With orders to approach the Goldbach at Soklonitz, 2nd Column plunged into the fog with all the joys that entailed. Depending on marching speed, the column deviates by a certain amount left or right determined by die roll. Of course I blundered in at full march speed (minus penalties for fog), blundered over ploughed ground (racking up multiple disorders), and deviated left, then right and left again, ending up more or less where I wanted to, but with many unwanted disorders. Knowing that having a skirmish screen out in front to guide the column would reduce the chances of getting lost, I sent my jaegers out in front. What I didn't realise was that due to their rubbish rating, they weren't able to guide the column anyway!

The 3rd brigade saw the other two disappear into the fog and thought better of following, marching around the fog-bank as the historical formation did and eventually arriving at the same point first and in a lot better condition!

Meanwhile, the Advance Guard and 1st Column had arrived at Telnitz to find the French in occupation of parts of the town. They set about screening the village in order to discourage French interference, while bombarding the town in preparation of expelling the French infantry. Our orders prevented us from crossing the Goldbach until the French on the eastern bank were dealt with, so I had to twiddle my thumbs until John S. (Buxhowden) and Paul (Doctoroff, or Doctor Love, as he soon rechristened himself) dealt with Andrew B.'s French interlopers. That wasn't such a bad thing, as I could regroup after my adventures in the fog and knock off the accumulated disorders.

Someone who didn't have a happy time in the fog was Philip, who commanded 3rd Column (Prybyszewski), and he wasn't even there! Not able to join us for the opening moves at the last moment, Tim stood in for him and moved the paper starting footprints in lieu of the missing figures. While following orders and moving to their designated position through the fog, 3rd Column was intercepted by Andrew B.'s French who blundered into their flank in the fog and loosed off a volley. 3rd Column lost all coherence as part of it reeled back in confusion after failed morale checks.

Further north, 5th Column (Liechtenstein) under Nigel had orders to head up to Blasowitz and link up with Bagration's Corps (Tim) and the Russian Guard (Quinny). Kutuzov's 4th Column Russians and Austrians, commanded by Robin and Jim respectively, were to advance in the centre and link up with the first 3 columns' sweeping move. Of course, that was the plan; reality was somewhat different!

Up at the northern end Lannes' and Bernadotte's (played by Vana, Jenko and Baden) Corps faced Tim as Bagratian and Quinny as Archduke Constantine, and tried to push forwards along the Olmutz road.