Time to get serious!

I've been distracted with my Spanish troops for too long now,  and I can say that it's been detrimental to my fortunes on the battlefield. While I love painting the varied and colourful uniforms of the Spaniards, their brittle morale and their small battalion size result in a performance on the table-top that isn't really worth the effort. This past Saturday was case in point (more to come!). Not a disaster, but too poor a troop combination to exploit advantages served up on a plate! If I still want to have a Peninsula War British and Allied force, that means I need to boost my numbers of British and Portuguese troops.

I started my project after reading about the Battle of Fuentes d'Onoro and how the 71st Light Infantry fought over the village in a bitter struggle, including an account of how after the battle two bodies were found, one Scot and one Frenchman, impaled on each others' bayonets! I thought then I had to paint this regiment, then found they were brigaded with the 92nd Gordon Highlanders and the 50th Foot and decided to paint them, too. I read some more and found the brigade was part of Rowland Hill's force that was detached from the main army to secure the southern flank against Soult's forces while the rest of the army chased Marmont to Salamanca in 1812. I had some idea of creating a scenario on the raid on the bridge at Almaraz, but it hasn't got very far! I started by painting elements of Ashworth's Portuguese brigade, but haven't progressed further than that.

Since then, and since my Spanish project is coming to a halt (I only need to give them some cavalry and I'm done), I've checked the brigade's history and found that from Vitoria onwards, this brigade shared 2nd Division with another two famous regiments: namely the 3rd Foot (The Buffs) and the 57th Foot (The Die-Hards). I can't pass up the opportunity to paint these two regiments! These regiments were brigaded with another battered victim of Albuera; the 1st Provisional Battalion, consisting of the remains of the 31st Foot and the 66th Foot which had been given the signal honour of remaining in the Peninsula, rather than being dispatched to Britain to recoup and refit.

I've already got a start on O'Callaghan's brigade as I have 2 generic battalions. As I already have a green facing-clad generic regiment, it will stand in for the 39th Foot. The other yellow-faced can be the 28th Foot or 34th Foot, requiring another yellow faced regiment to be painted to complete the brigade.

I'm painting the 6th Cacadores at the moment, in order to round off Ashworth's Portuguese brigade, but looking at the OB for Vitoria means I'll have to paint the 2nd battalions of the Portuguese 6th and 18th Line.

This division, once completed, should provide the added oomph! that it is lacking at the moment.

Orbat from Nafziger's Orders of Battle
Posted by Ben Gilmour at 9:58 AM 3 comments:

Damme and Gadzooks!
My blog has passed the 20,000 visitor mark! Huzzah!
Thanks again to all my followers and regular visitors. Your feedback makes it all worthwhile. Thanks, too, to the chaps at NWA for their constant support and use of their figures in illustrating my military genius (or lack thereof!) 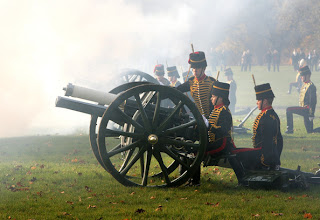 A piece of history (in more ways than one!)

Courtesy of a colleague of my wife's (thanks Peter!), I've become the proud owner of a remarkably well preserved 46 year old issue of LIFE magazine commemorating the 150th anniversary of the Battle of Waterloo.
It's not much more than a potted history of the battle, but it's got some lovely colour illustrations, and as a time capsule of life in 1965 the magazine is priceless (viz. cigarette ads, alcohol ads and advertisements for polystyrene cups using their disposabilty as a selling point!) 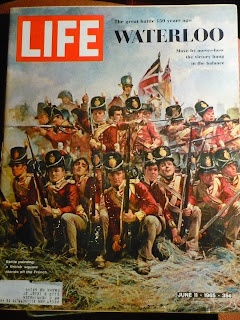 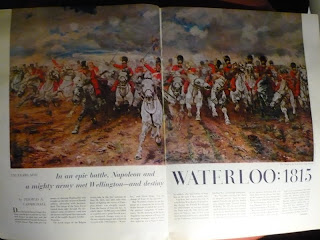 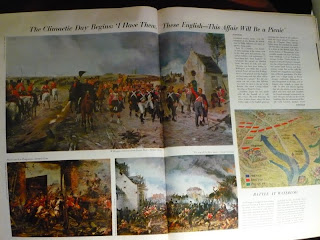 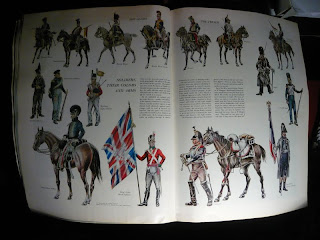 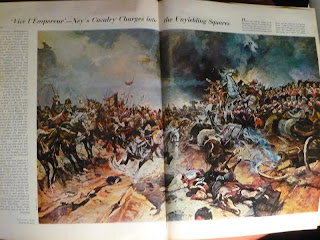 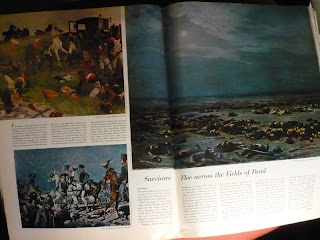 I gave the new Spanish units their first outing last Friday night against Andrew S. and his Frenchies. He went for quality over quantity with his cuirassiers and 12lber battery, which had me spooked from the start. If I was bolder and prepared to be more offensive (I'm actually a nice guy, though I can tell a blue joke or 2 when there's no ladies or kiddies present :-D), I could have had Andrew in all sorts of bother from the start as I had 2 squadrons of light dragoons to his one of cuirassiers.  In the battle post-mortem he pointed out that there was ample space for me to have put one of the LD squadrons around into his rear which would have forced him to break off that flank to deal with the threat while my other squadron and accompanying horse battery could have kept the pressure up from in front.
I was too fixated on keeping my army in line and not exposing my weaker Spanish units unnecessarily, although they were on the right flank and were the only units with a clear line of attack against Andrew's other flank. Maneuvering landwehr-rated units in our rules adds an extra function, so that they plodded slowly to get into position, and if I wanted their supports to conform, they had to slow down too. I did attempt a charge with my 3 regular-rated Spanish battalions (the 2 light infantry and one grenadier battalions) against one of the built up areas, but not quite having the 3-1 advantage plus an abysmal die roll saw them repulsed with losses and the 'clatter of dropped castanets' as Andrew put it! His 12lbers did some damage to my artillery perched on the hill, but I managed to knock a couple of his guns off in reply, which gave heart to the Spaniards!
Meanwhile on the other flank, all units shuffled to the left to keep out of the path of the nasty, nasty 12lbers inviting the French to advance over the wall and through the fields while my skirmishers popped at them adding more. Strangely, Andrew didn't accept this invitation! My skirmishers popped at them anyway.
Once I finally got around to moving my 2nd LD  squadron onto his flank, his only option was to charge straight ahead. If I'd had balls of steel I could have sat there and waited to see if his charge distance was sufficient (it wasn't) which would have left him stationary and blown just in front of my artillery and light dragoons, but, mainly because I didn't consider the fact he'd have to knock off  2" for the hill, I counter-charged, which led to a whole series of woe that ultimately cost me the game. The initial combat ended in a minor defeat for me, which pushed me back, but left him perfectly poised for lots of damage next turn. I knocked off a figure with some close range artillery fire, but that wasn't enough to save me from what happened next; his next charge flattened the horse battery, carved up my light dragoons and sent the nearest Portuguese battalion fleeing in terror. That signaled a general advance by the French on that flank, including a successful charge on the other Portuguese battalion that went battlemad, leaving the French battalion concerned in a precarious position. My one success of the night was a flank fire on this battalion that broke them, but by then it was all too late. That flank was crumbling, just as the Spanish were getting ready for another attack on the right flank. Too late!
Posted by Ben Gilmour at 3:46 PM 4 comments: