In a long delayed return to the club, I took part in a game at the last Croydon meeting with Bill and Baden against Jim and John R, where Bill, Baden and I played the Anglo-Iberian forces against John and Jim's Franco-Westphalian forces. The Spanish started on the board, occupying a central village, while both sides had an advanced guard starting on the edges of the board.

While my Spaniards held all the built-up areas of the town, I still had a substantial reserve and a big force of John's guerrillas. I had several small units of cavalry which I planned to use as a nuisance force against enemy infantry. Which would have been a clever plan, had the enemy advance guard not been almost exclusively cavalry. Good news for my infantry, but not so good for my teeny-tiny cavalry units!

I thought that I was going to be in all sorts of bother until Baden's advance guard turned up, but with my best troops in an anchored line, they were relatively safe from the hordes of enemy cavalry. My cavalry weren't so lucky! As we won the initiative, I sent my Extremadura lancers to see what was over the rise to the front. They soon found out! They were soon sent packing as French hussars and a horse gun battery set themselves up right in front of them. After losing a figure to artillery fire and failing their morale test (run away!), John charged his hussars at the rest of my hapless cavalry (run away, again!) and cleaned them all up in the process of one charge and its follow-through! However, my gunners had fled to the safety of the adjacent square and my converged grenadier battalion was on had to fire into the flank of the now stranded hussars and encourage them to decamp to their lines. Baden had managed to square up his infantry in the danger zone, so didn't suffer any adverse effects of the rampaging hussars, so despite the loss of some puny cavalry, we came out of it relatively unscathed. 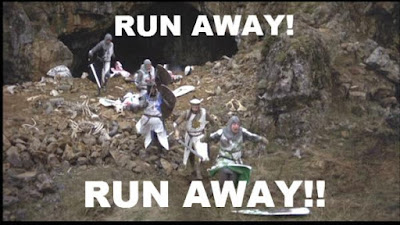 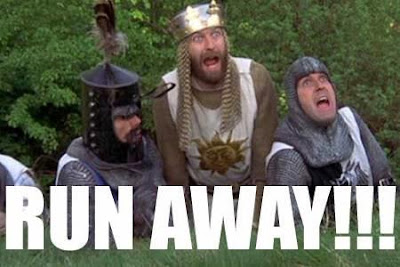 The problem now was to survive the incessant artillery fire raining down from the ridgeline. The square of light infantry anchoring one end of the anchored line eventually lost 30% casualties, but survived the morale test. I replaced them with the grenadiers who began copping casualties almost immediately. A counter-battery duel seemed to be a good idea, as the Spanish guns were heavier and more numerous, but John brought up more guns until I was outgunned. Even the eventual addition of Baden's batteries couldn't outgun the enemy, once John brought up his 12 pounder battery with the arrival of his main body.

The enemy infantry turned out to be mainly Westphalian, (though John also had what seemed to be an entire fleet's worth of Sailors of the Guard) and immediately showed that they are not made for Iberian conditions: Jim charged Bill's Portuguese cacadores who sheltered behind a stone wall and then decided the better of it after failing their pre-combat morale check. John advanced a brigade's worth of infantry at the village, while my guerrillas wasted a lot of powder trying to skirmish against them. He had peeled off one battalion and positioned it in line to screen the advance of the rest, so this was the unit the guerrillas potted away at. Surprisingly, they actually managed to add a disorder or two on the line. If I wasn't going to stand idly by and allow John a free swipe at the town, now was the time to do something about it. I now had rear and flank support in the shape of Baden's troops, so I decided to throw the Walloon Guards into the fray. They boldly marched up to the Westphalian line and launched a blistering firefight. Though I was outnumbered, my quality was a lot better. I knocked off a couple of his figures to the loss of only one, and survived the resulting morale test, while the Westphalians didn't. They retired from the field, leaving the approach of the other units to the village vulnerable to attack.


The line of Walloon Guards was dangerously exposed to a cavalry counter attack, so I brought up the light infantry and grenadiers in closed column on either flank to re-establish the anchored line. John's artillery soon put the light infantry to flight, leaving the Walloons vulnerable to losses from the big 12 pounder battery. They lost their magic 30% and failed their morale check dismally, bolting to the rear. But I couldn't be too disheartened, as they'd done their job and messed up John's preparations to assault the village. By this time, Baden's Anglo-Portuguese had come up and were holding the line to the left of the village, and were even preparing a combined arms  move around the enemy artillery's flank.


The game ended with the Spanish still safely ensconced in the town with Anglo-Portuguese support on both flanks. The Westphalian infantry seemed to have spent themselves in attack, but there was still the Sailors of the Guard who were yet to be committed. As the Franco-Westphalians had failed to take the town, it was technically an Anglo-Iberian victory, but the battle still had a way to go before a clear result was possible. Time was the victor in the end!
Posted by Ben Gilmour at 3:11 PM 6 comments: