I haven't been active on the blog of late due to a number of factors, including 4 days off work last week feeling generally bleaugh. On top of that I've misplaced the camera's SD card with photos of my last ignominious defeat at the hands of John R. I swear I would have put them up if I could find them, John. Honest!

To give a quick run down of the match in lieu of photos, I pitted my Anglo-Portuguese against John's Polish division. It would have been a relatively evenly matched game except for his %^&! 12lbers! He assured me they were only 3 lbers, the dirty scoundrel!

Things seemed to go swimmingly, though I should have probably been a tad more aggressive, rather than wait to be pounded by his big guns. I managed to send my light dragoons into his right flank in an opportunity charge that wrecked one battalion and forced the advance on that flank to halt, while his lancers and artillery dealt with the threat. On the other flank I had my heavy dragoons positioned to threaten his cuirassiers if they made any forward movement. What I didn't take in to account was that I'd left them too far away to try the opportunity charge as his 12-effing-pounders were supporting his cavalry and my dragoons had already been plastered by a volley or two. So when his cuirassiers charged my infantry (who were still in line) they had no cavlary support, and failed to get into square! Goodnight Irene!

On the painting front, I'm churning through another battalion of Schilling French, substituting SHQ command figures, as I miscalculated the number of officers and drummers I'd need for 9 figure battalions. They don't look out of place to my mind. They're very versatile, as I've used then with both the chunkier style sculpting and the finer recent outputs by HaT. I used Robert's hairpin method to replace the toothpick with something more Manly, but in 1/72 scale it resembles a machete or cutlass (yaarrr!) more than a gentleman's side-arm!

Also, I've taken time out to paint up another Franznap French lancer. I'm happy to see that he's got the metal figures available for sale at his online shop, so if you can't resist, go on and treat yourself to some of the best figures in 1/72 scale out there at the moment. 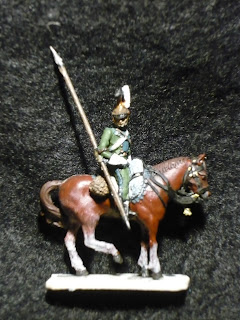 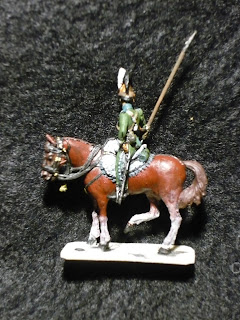 I can't make it to the Netherlands this year (or next year most likely!), but as a dedicated event for my chosen scale of figures organised by those friendly chaps at Benno's, I can't not do my bit in promoting this great event.

If you're in the north-west of Europe in early summer this year, why not do yourself a favour and make your way to Arnhem to check it out?
Posted by Ben Gilmour at 8:33 PM 1 comment:

Email ThisBlogThis!Share to TwitterShare to FacebookShare to Pinterest
Labels: Exhibitions

The Boffin, the Builder and the Bombadier


For those of you in Australia who haven't caught up with this show yet, you need to! It's a brilliantly funny, but instructive look at historical technology (mainly military), with a focus (so far) on Australian inventions.

The eponymous boffin, builder and bombadier take a military invention, like the periscope rifle and recreate it from existing images, descriptions and plans where available. Historical controversies, such as effective range in this instance, are settled by this highly entertaining practical historical investigation.

Other gadgets investigated are the ancient Chinese wheelbarrow mounted, rocket-propelled spear launcher, and the time-delay Scurry rifle, which allowed the Turks to believe that the trenches were still occupied while the ANZAC forces evacuated the Gallipoli trenches.

This little ripper of a show is on ABC1 at 8:15pm Sunday nights, right after Dr.Who. Sorry to all you international followers; you'll just have to wait until it comes to a TV station near you, or someone illegally uploads the episodes on to Youtube!
Posted by Ben Gilmour at 4:39 PM 6 comments:

Email ThisBlogThis!Share to TwitterShare to FacebookShare to Pinterest
Labels: TV

The last three figures are finished for this current battalion, drummer, officer and another fusilier. They are currently being based and then will receive the shading and varnish layers, then on to the next battalion.

After another Schilling battalion, I'll start on some more HaT French, Joseph Napoleon Spanish, more Franznap lancers, artillery and so on. 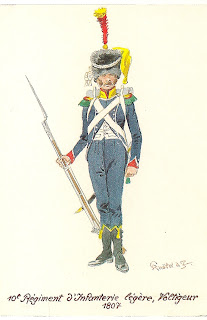 I've copied a whole bunch of French uniform plates by Knotel from Alfons Canovas' wonderful blog and created a folder in my Google Drive account for handy reference. I've made it open access so that anyone who feels like having a squiz can do so if you click the link.

I'll also put a link in the sidebar under the wargaming resources heading.
Posted by Ben Gilmour at 12:16 PM 9 comments:

Yet Another Russian-Style Spanking!

As the old saying goes "When at first you don't succeed, try, try again!"

Well, I've been bloody well trying a lot lately, and trying it is, I tell you!

Last Friday's club game was another attempt to get my French forces balanced enough to crush the might of the Russian Empire, and I thought I'd got it right after the previous drubbing I had at the hands of John W. As always, one prepares to fight the previous war, rather than the one facing one! As I had no idea of the forces that Garry would be assembling, I was taking a punt on my OB. Base on my experiences in my last outing I decided to go infantry heavy and have minimal cavalry and artillery: 21 infantry battalions and only one regiment of chasseurs accompanied by a battery of horse guns.

Needless to say, Garry went for a more balanced OB, including two 12 figure regiments of cavalry, which he  split as per our rules, into 4 smaller units, causing me an immense headache with my infantry heavy formation. I had assumed that I'd be able to use some of my infantry hordes defensively to ward off his cavalry, but didn't bank on the number he had available!

It was a real arm wrestle for quite a while until Garry launched a brigade charge in the centre-right of my line. Because of a couple of units that had copped flank fire and broke or retreated, my counter charge failed and was pushed back, leaving the extreme left battalion of my formation doubly disordered and sticking out in front of another battalion that had fouled its line of retreat. Garry exploited this by charging the isolated unit, breaking it, and carrying on through the one behind. In his next turn he launched his cavalry in a coups de grace that cracked me wide open. As I'd spent my reserves in shoring up the other flank against his attempts at outflanking me, I had nothing to counter attack his successful breakthrough in the middle. Game over!

While I think I was on the right track with my hordes of infantry, I probably should have given myself more cavalry to protect the flanks, instead of wasting my reserve in this role.