I've recently tried a method of creating homemade roads for my wargaming terrain collection. They look a lot nicer than boring old painted cardboard and come up really well. I think they're comparable to the commercially available roads and are a hell of a lot cheaper.

First gather your ingredients; Kitchen sponges, wood putty, spray paint, artist acrylic (I use burnt sienna), flock, PVA glue. All items bar the flock I picked up at the hardware shop, supermarket and the local $2 shop (or as I like to call it the lotsacrap). The putty and spray paint were the most expensive at roughly $15 AUD each, but then you won't have to fork out again for a very long time. Eight long road pieces and the smaller pieces pictured below later and I've still got two thirds of the tin of putty left. 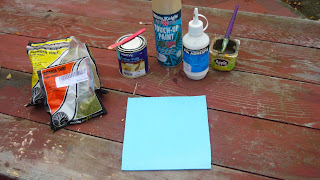 Cut the kitchen sponge into the desired shapes. 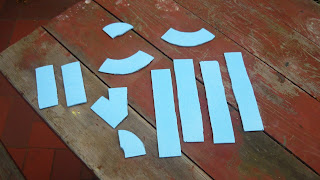 Spray the edges of the of the road pieces with the appropriate colour ie. a light tan, otherwise you have lovely roads that have a fluoro edge when seen from the side. 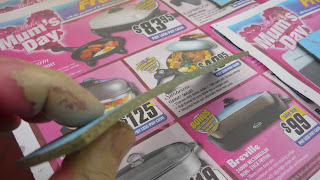 Slather the surface of your road piece in wood putty. Don't be too fussed with getting the putty to the edges as they will be covered in the flocking. However the ends of the roads do need to be well covered to avoid the tell tale peep of sponge colour breaking through. 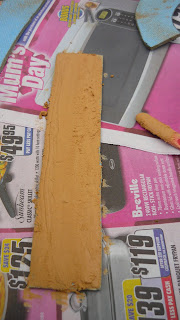 Don't worry about getting it too smooth, as the effect we're after is rough dirt after all. For added effect I ran the edge of the icy-pole stick, which I used to apply the putty, along the soft putty to make a pair of wheel ruts. 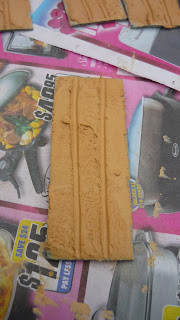 Once it's dried a bit, I dry-brush the pieces with the artist's acrylic and then flock the edges and the middle using the PVA and a combination of Woodland Scenics coarse turf and blended turf. Leave over night to dry. Next morning they will have a rather alarming camber as the dried putty will have contracted, pulling the sponge base inwards. With a combination of ironing using a moderate heat (no steam), making sure you cover the pieces in an old tea towel first to protect the iron, and then placing underneath a heavy item (say, the Waterloo Companion by Mark Adkin, isbn 0811718549) for another day, you'll have some nice, cheap country roads for your troops to march to battle on! 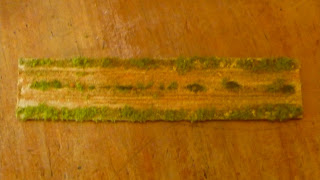 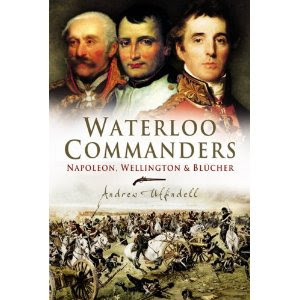 A good comparative biography of the three commanders of the Waterloo campaign. Having not a lot of knowledge about Blucher apart from his 1815 campaign, this was a good introduction to the man. It dispels the myth that he was just a tool of Gneisenau and that he was just a hussar who needed to be pointed in a particular direction. He was a great leader of men, much loved by his men and even by the Russian rank and file, with whom he cultivated a rapport with by such populist gestures as asking soldiers for tobacco for his pipe etc. He was able to motivate prickly subordinates like Yorck as well as Russian generals like Osten-Sacken. He could be impulsive at times, but his value as a commander was obvious when he was not available to command, ie. when he fell ill during the 1814 campaign in France, the Army of Silesia was rudderless. My favourite Blucher anecdote is his claim to be the only man in the world able to kiss his own head. So saying, he turned and gave Gneisenau a smack on the top of his head!

Uffindell's view of Wellington I didn't completely agree with; He argued that Wellington was not as prickly and controlling with his staff as legend portrays him. He was just picky about who he trusted and valued ie. his QMG Sir George Murray and his gaggle of young, well connected ADCs. What Uffindell failed to mention was that Wellington was still a creature of his age and that it didn't matter what your talents were, unless you came from the right background, you were very much on the outer, as with his intelligence chief Scovell (see The Man Who Broke Napoleon's Codes, Urban, M. isbn 0571205380 )who almost single-handedly ran Wellington's code-breaking and intelligence gathering operations, but remained at a relatively junior rank because of his background and lack of wealth and influence. His views on Wellington's logistical, tactical and strategic brilliance were pretty much spot on.

Napoleon on the other hand came in for a bit of a drubbing because of his lack of moderation in dealing with other nations, his accountability to no one and his belief in his own publicity, which are all fairly much accepted criticisms. Once his enemies united and fought him using his own methods, his fate was more or less sealed.

All in all a useful work that puts all three careers in perspective.
Posted by Ben Gilmour at 10:34 AM No comments:

Some of my troops

Last night's game fell through when my opponent failed to show (yes, you know who you are!). I can't really complain, because I've had to do the same to others on occasion.
Anyhow, I ended up playing a game of AWI fast play rules, for a change. Different, interesting, but still doesn't grab me the way that the Napoleonic period does.

In lieu of pictures of last night's game, here's some pictures of the campaign in that little known Spanish province of Backyardia. 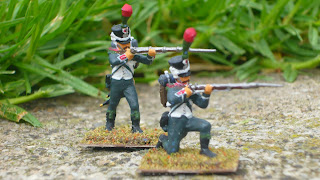 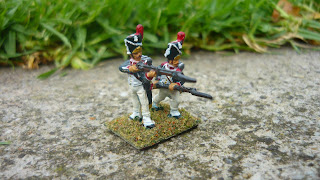 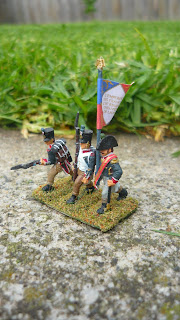 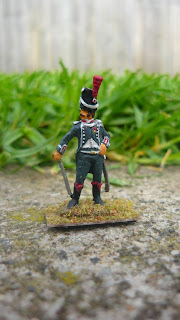 HaT Chasseur officer (one of my favourites) 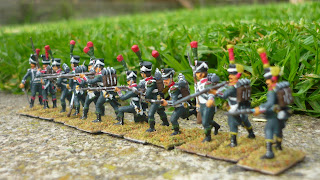 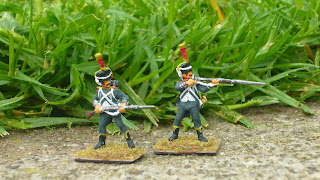 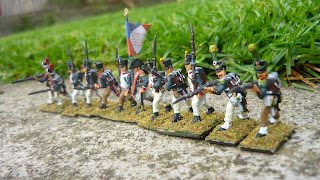 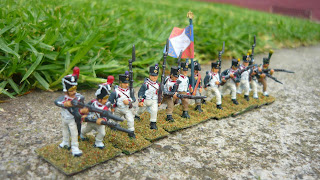 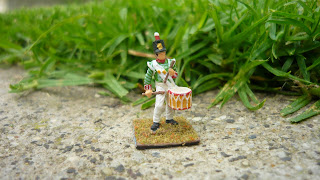 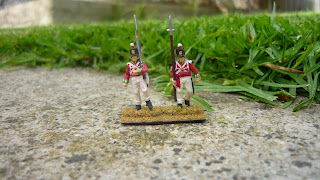 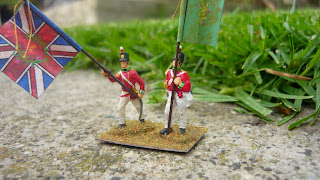 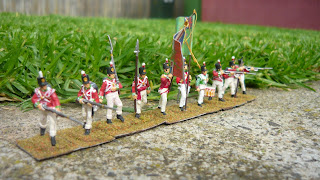 British line
On close examination the figures show a bit of damage from regular useage. Might need to do a bit of touching up before I do any more posting of figures.

More to come including my French cavalry and artillery as well as some more British line and light infantry. I'll also post some pictures of my current project; Highlanders! (&*^%$* tartan!)

Welcome to my blog!

After viewing all the wonderful blogs out there dedicated to wargaming in general and Napoleonics in particular, I felt that it was my duty to start ANOTHER blog dedicated to the subject. I doubt I'll ever get to the standards of Roly Hermans or DocSmith (2 of my favourite bloggers), but I felt that I should give it a go!

As you may have guessed from the title, my interest lies in the Peninsula theatre of the Napoleonic Wars, in particular, but also the whole 1805-15 period in general. And so I have created a generic French army in 20mm plastic, mainly Hat, Italeri and Zvezda for Friday evening and Saturday afternoon club games. I also have some metal ring-ins, but due to scale problems, I haven't a lot, only one unit of cuirassiers. I am now creating a British army from HaT's brilliant Peninsula infantry pack, but due to a dearth of decent Highlander figures and the lack of colour bearers, I have bitten the bullet and bought more lead after discovering the range of 20mm lead figures put out by Kennington.

One of the main reasons I chose plastic 20mm was the affordability, but as most other members of the club I belong to are retiring their 25mm armies and replacing them with 28mm figures, I sometimes feel like my chaps are a tad on the undernourished side! Since I started this hobby 2 years ago, there has been a steady release of plastic 28mm figures which I have decided to forgo because I already have a mountain of unpainted plastic and a steadily growing one of lead, and I don't think Mrs. Rosbif would be too impressed if she realised I was starting again from scratch!

I love the research and the painting as much as the gaming (which after 2 years I'm still not the best at). With the collection at work, and access to academic collections throughout Australia, I'm pretty lucky. However that usually entails a large pile of books sitting unread on my bedside table as I slowly plod through my latest. I find this interweb thingy a mine of information too, and intend to put links to useful sites here on this blog.

I'll be putting up pictures of my completed units, my home made terrain, works in progress, both figures and terrain, as well as pictures of my weekly games. I'll also give a progress report on books I'm reading at the moment as well as list the books I want to read in the future.

Please feel free to comment with suggestions/criticisms and queries. 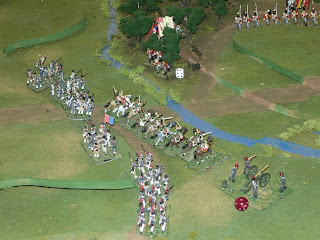 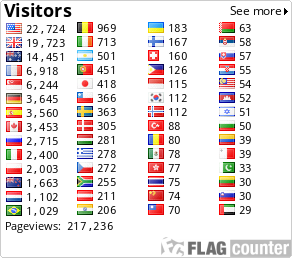